Showing posts from January, 2010
Show all 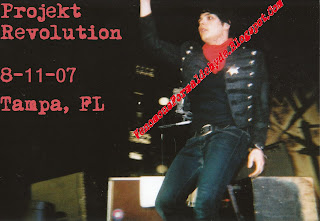 I was supposed to see another show on the Black Parade/ My Chemical Romance tour from my previous post, but it happened to be the Columbus show that ended up postponed for three days and eventually canceled after bands and crew-members on the tour got food-poisoning at a previous show. Note: This review was written and originally posted near the time of the show. It has received only minor editing. --- "Mama, we’re all gunna JUMP!" After a 20-hour drive to Tampa and a couple days of doing things that amused my mother, my friend and I made ourselves at home in our new hotel, which was directly across from the Florida State Fairgrounds where the concert was to be held the next day. August 11th, 2007- Projekt Revolution: Tampa, FL The Wait We got to the venue at about 6:30 a.m. after circling the perimeter of the fairgrounds to be positive that there was no other line. See, we had to do this, because the gate that let cars in had yet to open and there were about 6 peo
Post a Comment
Read more

January 20, 2010
I find that more and more often now people are taking what I write and are copy-pasting it on other sites. It's AWESOME if you want to use what I've written to help spread information, but could you please just link it here or at least give me some form of credit? I would appreciate being able to know where things I write are being re-posted. Thanks. cassie.
1 comment
Read more

In today's feature from NME Magazine , Gerard Way of My Chemical Romance divulges some information fans didn't already know. The writer of the article revealed the song we knew as "Trans Am" has been re-titled "Bullet Proof Heart," and is likely to be the first single from My Chemical Romance's upcoming album. In addition to the "Jenny" character in the song, there apparently is also a "Johnny," a runaway-type character that Gerard said is symbolic of what is often the point of starting a band. "You get into a van to run away." Way said, "I didn't want to end up where I grew up, and that's not to speak ill of Jersey at all. I love New Jersey, but I didn't want to end up with a job I hated just floating through life. I wanted to escape. And so I definitely felt at times when we started in the band that there were forces, albeit in my head, that were conspiring against us to keep us in a basement, and yo
5 comments
Read more

My Chemical Romance to appear in tomorrow's NME Magazine

::UPDATE Article summary here . Gerard Way of My Chemical Romance appears on the cover of this week's issue of NME. In the magazine is an article in which Way discusses MCR's upcoming release. Check out NME's Web site for more details Magazine on newsstands tomorrow. XoXo c.
2 comments
Read more

MASSIVE UPDATE: Jan 16, 2010 I just received the following message from 140tc, which is to host the twitter conferences at "Tweet House": Preparing post & email regarding this. Promoter who contracted bands/our space was unable to pay any obligated $. A mystery. --- Original Post: An article from Salt Lake Tribune announced musical events and music-based films that are to happen during the 2010 Sundance Film Festival , which spans Jan. 21st through the 31st and takes place in Park City, Utah. At the bottom of the list of music events was this: Tweet House » Bands 30 Seconds To Mars , The Bravery , Silver Sun Pickups and My Chemical Romance are to perform at the "Tweet House," Jan. 22-25, inside the Yoga Shop, near Main Street, 1167 Woodside Ave. The event is designed to celebrate Twitter's global influence. Find details at: http://parnassusgroup.com/twitterconference . The event website describes the "Tweet House at Sundance"
5 comments
Read more

Album Review: The Bouncing Souls - Ghosts on the Boardwalk 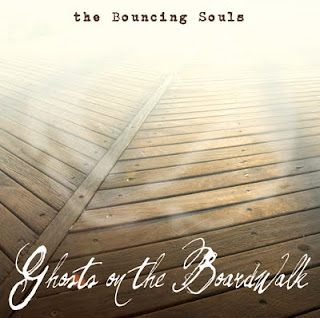 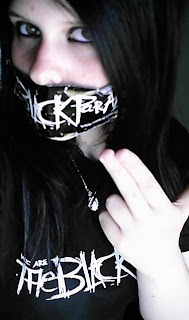 After that last show I went to in 2005 , I hit an MCR dry-spell. Through the beginning of 2006, they were recording The Black Parade , which meant there were no shows for a while. A glimpse into MCR history: 2006 & the "WTF is The Black Parade?!" craze Everything was relatively quiet in the MCR world until circa June 2006 when Hot Topic started distributing the now legendarily mysterious "We are the black parade" shirts that none of us understood at the time but still faithfully bought. Also in June, MCR announced two festival shows in Allentown, Pennsylvania on September 2 and 3 with Taking Back Sunday, Hot Like [A] Robot, Say Anything & The Honorary Title that I thought I was going to be able to attend at the time. In July, mysterious photos surfaced with strange titles that included "TBP" and "character" in them of Gerard with bright white hair. Oh, and Mikey's glasses vanished forever... In August, things really started to h
2 comments
Read more

January 06, 2010
Check out these three videos of My Chemical Romance drummer Bob Bryar discussing his drum preferences and how injury has affected his drumming: XoXo c. ::EDIT:: Added after post:
Post a Comment
Read more 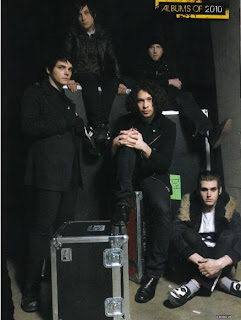 In an interview from Kerrang!'s '50 Albums You Must Hear in 2010' issue , singer Gerard Way compares My Chemical Romance's upcoming release to 2006's The Black Parade . "There's chaos, but I think it sounds just as ambitious as The Black Parade ," Way said. He notes that the band has maintained their 'angst' and 'attitude' that is apparent in past releases, but that there is a more positive element that went into the upcoming MCR release that makes it different. "This was a record born out of positive energy and The Black Parade was opposite. You make such a big theatrical death fantasy, and you have to go to those really fucked up places to get there, and I think only bad shit is going to follow that. It always felt like there was a bit of a curse on The Black Parade tours," Way said. Way has said in the past that the upcoming album is a sort of self-protest , but he reassured Kerrang! that it is for no sort of style
Post a Comment
Read more 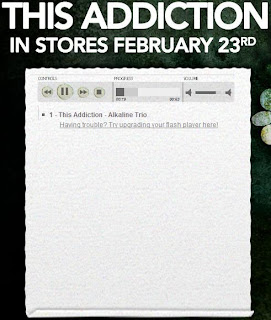 Fans can now preview "This Addiction," the first single from Alkaline Trio 's upcoming release of the same title. This Addiction is set for release on Epitaph and Alkaline Trio's own Heart & Skull imprint on February 23. XoXo c.
Post a Comment
Read more

January 05, 2010
http://www.formspring.me/PoisonAndFire One of my most recent MCR-related answers: Does it worry or excite you the My Chem is saying they going a different direction then their old music? I mean yeah, most of their records are very distinct, but in an AP interview I believe it was Gerard who said 'our old fans will not like it.' It's very easy, since My Chemical Romance's previous work is so phenomenal, to get caught up in wishing they would make the same album over and over, but they never have and it has always been fine in the past. They've always done everything beautifully, but I don't necessarily think that's purely musical. No matter what they do, they do it with heart. They put every ounce of what they have into every album they put out and they absolutely believe in their band and the many directions they have taken as a band. When MCR do put out the new album, I guarantee that they put everything they had into it and that it is them and not
1 comment
Read more
More posts