Showing posts from March, 2011
Show all

UPDATE: March 31 @ 9:34 A.M. Listen to MCR's cover of Pulp's "Common People": My Chemical Romance - Common People (Pulp Cover) by thisisfakediy ORIGINAL POST My Chemical Romance's session at BBC Radio 1's Live Lounge that aired this morning featured in-BBC-studio performances of "Common People" by Pulp, which they had performed at a few stops of their recent European tour, and of MCR's current U.K. single "Planetary (GO!)." In the interview the accompanied the live performances, My Chemical Romance discussed topics ranging from their joking that that shred all the stuffed unicorn toys they get on tour to performing at BBC Radio 1's Big Weekend on May 15. When asked what they would be likely to play at the festival, Gerard Way said they would possibly play a lot of material from Danger Days... , which the interviewer suggested, but that they hadn't worked out their festival sets yet, but that they wanted to includ
2 comments
Read more

My Chemical Romance ask for fan help in #SINGItForJapan Project

March 28, 2011
My Chemical Romance are set to release a special version of "SING" to raise money for Japan's recovery effort. They are asking fans to submit photos, videos and artwork showing support for Japan to possibly be used in a shareable video for the song. All of the proceeds from the purchase of the new version of "SING" will go to Red Cross Japan . In a blog entry posted on Friday, lead guitarist Ray Toro explained that the project was inspired by fans on Twitter who were sending hope and condolences to Japan using the hashtag "#SINGItForJapan" following the tragedy-bringing earthquake and tsunami that hit the country earlier this month. Fan contributions must be submitted via this form by March 30 at 5 P.M. PST. __ UPDATE: April 1, 2011 @ 1:17 P.M. EST Check out Toro's footage from the string recording of the new version of "SING" XoXo c.
Post a Comment
Read more 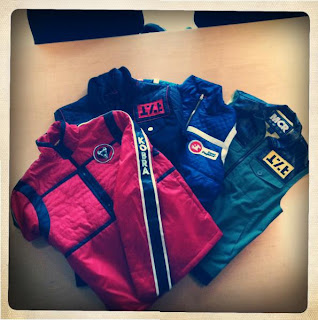 UPDATE: March 25, 2011 @ 6:13 P.M. EST The replica jackets are now available . The special-edition replica jackets range from $89.99 to $99.99 and will be sold exclusively through My Chemical Romance's online store. Check them out: Fun Ghoul [vest] | Jet Star [jacket] | Party Poison [jacket] | Kobra Kid [jacket] __ UPDATE: March 24, 2011 @ 7:09 P.M. EST Full picture: ORIGINAL POST: My Chemical Romance have been gradually revealing an image of what appears to be replica Killjoy jackets on Twitpic and the MCRmy . Those of us who attended the Danger Days... listening party in November, 2010 were informed by the person who runs My Chemical Romance's merch store that they eventually would be selling such jackets. If I'm taking these hints correctly, it appears the time has come for those jackets to be released! Which of the Killjoy jackets do you want? XoXo c.
3 comments
Read more

The MCRmy , My Chemical Romance's official fan community and street-team relaunched March 21. The new MCRmy, because its promo "missions" will be based primarily online, lives on Tumblr where its content will be easily shareable among team members and those who are not team members alike. The site is revamped and there are many new features for members to explore. One of the new features of the MCRmy, for instance, is the option to register your local "gangs" to make meet-ups for easy for members. The MCRmy message board , a place many of us called home before the original Street Network-hosted MCRmy shut down, has - of course - returned. I'm very honored to say that I have been asked to be among the board's moderators. So, if you have any questions let me know! Join the MCRmy , and let's make this bigger than ever before, soldiers! XoXo c.
1 comment
Read more

UPDATE: March 24, 2011 @ 4:37 P.M. EST ORIGINAL POST : As a part of American Express' "UNSTAGED" concert series, Duran Duran will be live-streaming a performance directed by David Lynch tonight on their Youtube/VEVO account. My Chemical Romance fans will be interested to know that earlier today Duran Duran announced via Twitter that Gerard Way, vocalist of My Chemical Romance will be joining them for the performance. Tune in tonight at 10 p.m. EST! XoXo c.
Post a Comment
Read more

My Chemical Romance premiered their "Planetary (GO!)" video yesterday on Facebook . The video was shot live on February 24 at London's O2 Academy Islington. The final product features live performance and crowd shots mixed with overlapping select lyrics in both English and Japanese. Check it out! The "Planetary (GO!)" single, which will be released March 27 in the U.K. and Ireland, will come with two remixed versions of the song: "Planetary (GO!) (Lags Gallows Remix)" and "Planetary (GO!) (Vasquez/ Gorman Remix)." You can listen to the Lags Gallows remix on Hype Machine . XoXo c.
Post a Comment
Read more

Now that My Chemical Romance's Danger Days: The True Lives of the Fabulous Killjoys is out, I'm finding more and more questions about it leading people to this site. I figured it would be beneficial to address some of the ones that are asked most frequently in one place for the benefit of all! I hope this helps! ORIGINAL POST:  November 24, 2010 @ 11:57 P.M. UPDATED: March 18, 2011 @ 9:47 P.M. ____ The Killjoys Fun Ghoul -Corresponding MCR member: Guitarist, Frank Iero - Raygun : Green with horror-style stickers attached to it -Symbol: A smiling face with one eye crossed out and a jagged mouth -Physical Description: Wears a yellow shirt with black-striped accents over which he wears a military vest. In the video for "SING," Fun Ghoul bears a scar on the right side of his face at his mouth. -Mask: Purple and green Frankenstein mask -Additional Information: ... Jet Star -Corresponding MCR member: Guitarist, Ray Toro - Raygun : Blue with red and whit
16 comments
Read more

UPDATE: March 11 @ 5:31 A.M. EST The BBC Radio 1 Live Lounge page now indicates that the My Chemical Romance session will be pushed to March 31. ___ ORIGINAL POST: March 5 @ 11:33 A.M. EST My Chemical Romance are set to appear on BBC Radio 1's Live Lounge March 11, 2011. Live Lounge sessions traditionally feature an artist's performance of an original song and of a cover. In the past, My Chemical Romance covered Blur's "Song 2" for the show. What do you think or hope they will play for this session? Tune in at 10 a.m. UK time to find out! XoXo c.
Post a Comment
Read more

March 10, 2011
Check out the extended version of My Chemical Romance's "SING" video with an additional 37 seconds added and sound effects audible over the music! Finally, we get to hear what a blaster from 2019 sounds like! And if you thought the raygun battle at BLI Towers was intense before, check it out with an added dramatic twist the sound effects: XoXo c.
Post a Comment
Read more 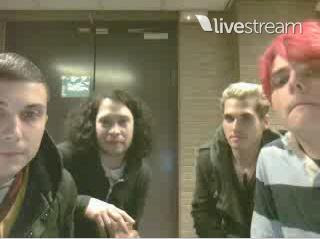 EDIT: March 5, 2011 at 1:48 P.M. MTV Spain recorded the interview, which you can watch here: ___ ORIGINAL POST: March 5, 2011 @ 1:30 P.M. EST Last week, My Chemical Romance was announced as the headliner of MTV Winter Music Event in Spain on March 12 (to be broadcast April 15 on MTV's World Stage). Today, MTV Spain talked to My Chemical Romance about the Event, for which they all unanimously said they are "excited" and agreed that they love the art, architecture and people of Spain. MTV allowed fans to submit their own questions for the band to answer via Twitcam . My Chemical Romance, who described themselves in one word, "friends," leaned in and squinted as fan questions scrolled by at surprising speed and picked up several to answer. Many fans were curious about future live setlists and what the band may or may not include on them or how current songs could evolve. Much to the surprise of fans, the guys admitted that they would like to play
1 comment
Read more 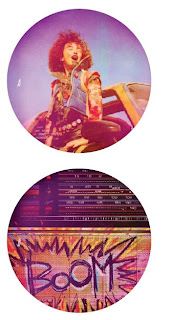