Showing posts from October, 2010
Show all

Behind the Scenes of My Chemical Romance's "Na Na Na..." Video 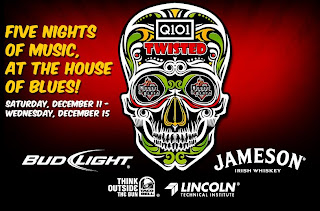 Chicago's Q101 has announced that My Chemical Romance will be among the artists playing its "Twisted" show series mid-December. My Chemical Romance, along with Middle Class Rut, are set to close out Q101's 5-night show series on December 15 at the House of Blues . Tickets for the event are set to go onsale this Friday, October 29 at 10 A.M.. According to its event page , the show will be admitting fans 17 and older. Ticketmaster shows two different ticket ordering options for the show. Ones for something called "pass the line," which seems to be a $15 voucher that allows line-cutting (a usual phenomenon, as I have come to find, at House of Blues venues) and the other for the tickets themselves . XoXo c. PS: I'm pretty sure I'm going. Expect a review!
Post a Comment
Read more 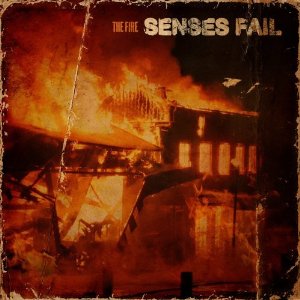 Through the live-tweeting of Kerrang! Magazine and fans at the show, MCR followers from all over the world were able to get a glimpse of My Chemical Romance's comeback show at London's Hammersmith Apollo tonight. According to Kerrang!, the band's setlist was as follows: "Na Na Na (Na Na Na Na Na Na Na Na Na)" "Thank You For The Venom" "Dead!" "Cemetery Drive" "Planetary (GO!)" "I'm Not Okay (I Promise)" "Give 'Em Hell, Kid" "Our Lady Of Sorrows"* "I Don't Love You" "You Know What They Do To Guys Like Us In Prison" "The Only Hope For Me Is You" "Honey, This Mirror Isn't Big Enough For The Two Of Us"* "This Is How I Disappear" "Welcome To The Black Parade" "Helena" "Mama" "Teenagers" "The Ghost Of You" "Famous Last Words" "Sleep" &quo
3 comments
Read more

My Chemical Romance Give Insight to Upcoming Live Shows and Videos

This morning, My Chemical Romance appeared on BBC's Radio 1 to discuss their European tour, which starts today, and to give a bit of insight to their upcoming video. The band says they're going into their first show tonight in London without much of a plan, but with a setlist that includes four new songs from Danger Days: The True Lives of the Fabulous Killjoys , including the not-yet-heard "The Kids From Yesterday," which they reveal is their current favorite song to play live. "It will be a while before anyone hears ["The Kids From Yesterday"], but it's totally because we want to play it. We're totally playing a song for ourselves, because we love it so much," vocalist Gerard Way said. In addition to unveiling one of their brand new tracks, Way said that the band will play material from their first album, I Brought You My Bullets, You Brought Me Your Love , which had made only rare appearances in MCR sets after 2005. Gerard says
1 comment
Read more 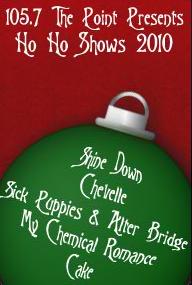 105.7 The Point , a St. Louis radio station, has announced My Chemical Romance as one of the artists playing in their holiday "Ho Ho Shows" series . The show is set for December 14 at St. Louis' The Pageant . Tickets are set to go onsale this Friday, October 22 at 5 p.m. Central, according to The Pageant's website. Minors attending the show will be expected to pay an additional $2 at the door. Keep an eye on the event's Ticketmaster page ! XoXo c.
Post a Comment
Read more 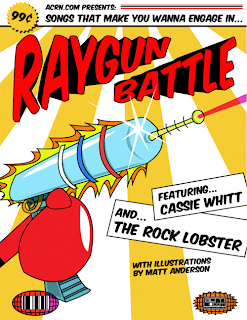 The world has ended, a select few have survived, and there’s a power struggle to take dominance of our desolate landscape. To what would our raygun-slinger protagonists listen as they fight to survive? Read my full story for ACRN.com XoXo c. Illustration by: Matt Anderson
Post a Comment
Read more

My Chemical Romance are set to play a "Myspace Secret Show" in Munich, Germany on October 26. The show, which will take place at Munich's Backstage Werk comes in the middle of the band's European "World Contamination Tour" which spans The U.K., Netherlands, France and Germany. Admittance to the secret show is free and, according to the band's website, requires that concert-goers print their Myspace profiles with My Chemical Romance and Myspace Secret Shows in their Top Friends. Only the first 700 fans to show up will be granted admittance to the venue; so, arrive early, Killjoys! XoXo c.
2 comments
Read more

October 13, 2010
Last school year, I was asked to be a part of a video presented at a Scripps School of Communication banquet. In it, I give a very brief explanation of some of the accomplishments I have made with my #MCRchat on Twitter . Ohio University Scripps Students and Social Media, Spring 2010 from Scripps College of Communication on Vimeo . XoXo c.
4 comments
Read more

My Chemical Romance to Headline 97X Next Big Thing Festival in Tampa, Florida 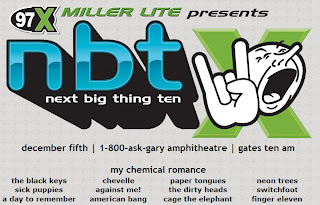 The first of what fans hope will be many U.S. Shows has been added to the official My Chemical Romance tour page . The show, a festival event hosted by radio station 97X , is set to take place December 5 at the 1-800-ASK-Gary Amphitheater at the Florida State Fairgrounds. The line-up for the show also includes: The Black Keys, Chevelle, Cage The Elephant, Switchfoot, A Day To Remember, Against Me!, Paper Tongues, Neon Trees, Sick Puppies, American Bang and Finger Eleven. Fans can purchase tickets now. XoXo c. Note: Check out my review from when I saw My Chemical Romance at The Florida State Fairgrounds ampitheater in 2007.
2 comments
Read more

Possible My Chemical Romance Single Release: "The Only Hope for Me is You" 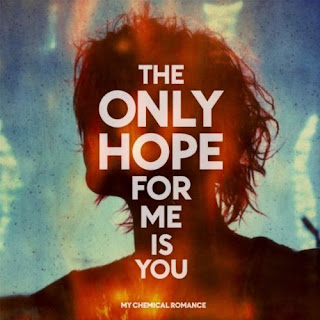 Last week, Amazon.com posted an order page for the MP3 download of My Chemical Romance's "The Only Hope for is You." According to Amazon, the MP3 download is set for release tomorrow, October 12. No information has been posted on the band's official website about the release of "The Only Hope for me is You." If the song does become available for download, it will have been released only two weeks after "Na Na Na (Na Na Na Na Na Na Na Na Na)," the first single from Danger Days: The True Lives of the Fabulous Killjoys and only two days preceding "Na Na Na..."'s video premier . XoXo c.
2 comments
Read more

October 11, 2010
According to a blog post on My Chemical Romance's website, MCR are set to perform their new single "Na Na Na..." and "Welcome to the Black Parade" before the NFL Pepsi Max International Series game on October 31 at Wembley Stadium. Interested fans can find tickets on U.K. Ticketmaster . XoXo c.
Post a Comment
Read more 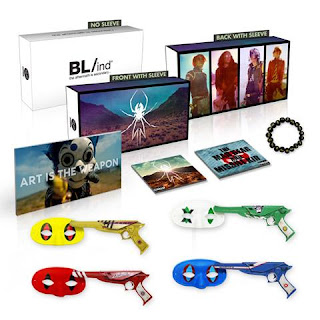 Fans can now pre-order the "Danger Days: 'California 2019 Edition'" Box Set from the My Chemical Romance online store. The set includes shiny accessories that are to-die-for for anyone in the Killjoys camp, including necessary Zone accessories like masks, rayguns and a "bad luck beads" wooden bracelet. As far as musical and artistic extras go, the package comes - obviously - with Danger Days: The True Lives of the Fabulous Killjoys as well as a 3-song EP "by The Mad Gear & Missile Kid" and a 48-page photo booklet. Worth the $69.99? This Crash-Queen would say absolutely. XoXo c.
1 comment
Read more 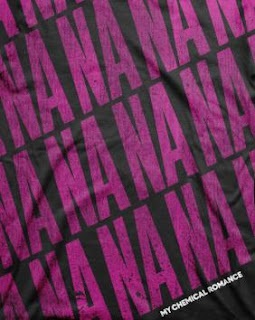 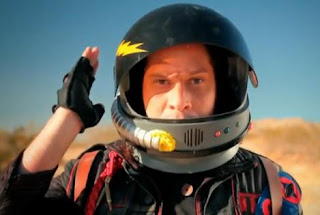 An article posted yesterday on Spin.Com featured quotes from My Chemical Romance guitarist Ray Toro about the band's upcoming album, Danger Days: The True Lives of the Fabulous Killjoys . In the article, Toro explains that, with the band's reuniting with producer Rob Cavallo, they broke the rules they had set for themselves in the songwriting process and ultimately ended up creating music with a theme of "finding a sense of freedom and using creativity and art as the weapon, as opposed to worrying about the end result." Toro and Spin give brief descriptions of four of those new pieces of music in the article: "'Party Poison' One of the salvaged songs from My Chem's earlier sessions, "Party Poison" may be the most straight-forward punk tune on Danger Days: buzzsaw guitar riffs, clattering beats, and Way howling over the chorus. There's even a shout-out to the MC5's 1969 proto-punk classic "Kick Out the Jams." (My C
Post a Comment
Read more

My Chemical Romance have revealed the official cover art for their upcoming album Danger Days: True Lives of the Fabulous Killjoys . The cover art is not a new idea to My Chemical Romance fans who are familiar with Frank Iero's series of limited edition lithographs. The final print in his series is similar to the album's cover art. You can look down at the album cover when you hold the C.D. in your hands on its release date, November 22. Or, at least, I know I will. XoXo c.
Post a Comment
Read more
More posts