Showing posts from August, 2012
Show all

Originally posted August 29 at 10:13 a.m. on AltPress.com (sometimes I'm there when news breaks and can't blog about it here immediately.) deadmau5 has released his high-budget video for "Professional Griefers" featuring Gerard Way from My Chemical Romance . Watch Way and deadmau5 battle it out "UFC in the future" style the video below:
Post a Comment
Read more 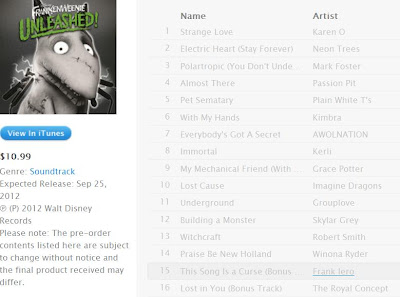 This morning @ligxo pointed out to me that a song by Frank Iero will be featured on the upcoming soundtrack for Frankenweenie Unleashed! . The song, "This Song Is A Curse," is among the soundtrack's 2 just-revealed bonus tracks. The soundtrack is set for release September 25. XoXo c.
Post a Comment
Read more

Earlier this week, Rolling Stone announced that in addition to the online "Professional Griefers" (featuring My Chemical Romance 's Gerard Way ) premiere tomorrow, the video will also be screened at a UFC match on September 1. Yesterday, just 2 days before the video release, deadmau5 put out another teaser for this video. Check out it and Gerard's "Professional Griefers" flier below: XoXo c.
1 comment
Read more 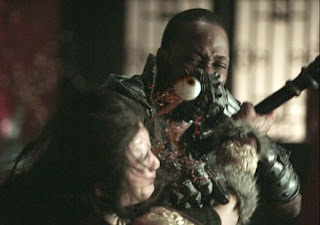 UPDATE: August 28, 2012 @ 8:16 a.m. Despite RZA's having seemingly confirmed MCR's spot on The Man With The Iron Fists soundtrack, as the tracklisting was revealed today, there is no sign of a My Chemical Romance song (neither old nor new) on it. Full tracklisting below: 1. The Black Keys / RZA “The Baddest Man Alive” 2. Ghostface Killah / M.O.P / Pharoahe Monch “Black Out” 3. Kanye West “White Dress” 4. The Revelations feat. Tre Williams “I Forgot To Be Your Lover” 5. Talib Kweli / RES “Get Your Way (Sex as a Weapon)” 6. Raekwon / Ghostface Killah / Kool G. Rap “Rivers of Blood” 7. Method Man / Freddie Gibbs / StreetLife “Built for This” 8. 24 Carat Black “Poverty’s Paradise” 9. Killa Sin “The Archer” 10. RZA / Flatbush Zombies “Just Blowin’ In The Wind” 12. Corrine Bailey Rae “Chains” 13. Pusha T / Raekwon “Tick Tock” 14. Frances Yip “Green is the Mountain” 15. The Wu-Tang Clan “Six Directions of Boxing” 16. Mabel John “Your Good Thing Is About To End” If you're stil
2 comments
Read more

Here's an outline of what's been going on in the My Chemical Romance world since my previous update on August 8. August 21 deadmau5 posted the below behind-the-scenes footage from the "Professional Griefers" video, which is set for release next Wednesday. "Professional Griefers" is now available on iTunes ! August 20 Yesterday, MCR unveiled their "School Sucks, Start A Band" varsity jacket (pictured left.) You can order the jacket from MCR's online store for $69.99 August 16 Neil Krug, the photographer who shot the Danger Days... album art posted a previously-unreleased photo of Gerard Way (right.) August 13 Gerard Way discusses My Chemical Romance’s 5th album on “Spoilers” with Kevin Smith The BIG news. Gerard, for the first time, has opened up a bit about what he is calling "MCR 5" at the moment. Click through and watch the interview. Dark and costumes and progress--OH MY! August 11 Shaun S
Post a Comment
Read more

Note: I originally posted this on AltPress.com . Gerard Way discussed My Chemical Romance's upcoming 5th album on today's episode of " Spoilers ," hosted by Kevin Smith. He said MCR 5 , as he is calling it while it is in-progress, is "going rather quickly" and that the album is "very dark so far." The album, Way hints, will also include  the band's wearing costumes. He told Kevin Smith he's meeting with Colleen Atwood, who has designed the band's costumes since The Black Parade , soon to work out the costumes to accompany the next album. Gerard also played "Small Petunia Of The Galaxy," a song he wrote for his daughter, from his iPhone during the interview. XoXo c. Other recent MCR news I've posted for AP: deadmau5 reveals album details; single ft. Gerard Way (My Chemical Romance) to be released August 14 “Rock Band Blitz” to feature tracks from My Chemical Romance, Avenged Sevenfold, fun. and more Previ
2 comments
Read more 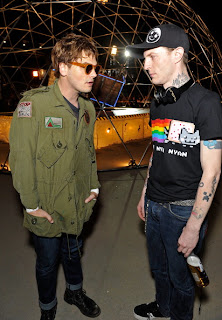 UPDATE: August 13 @ 11:10 p.m. EST "Professional Griefers" is now available to download through iTunes in the U.S.! UPDATE: August 10 @ 10:47 a.m. EST Ultra Records was a little less cryptic than deadmau5 about the video release date. The video IS set to premiere August 29. ORIGINAL POST: In a press release about his upcoming album, >album title goes here< , Deadmau5 announced today that "Professional Griefers," which features vocals from Gerard Way, will be released August 14 in North America. Additionally, the video for the song , which was recorded in May and produced by Weapons Of Mass Entertainment , is set for a still-unannounced date this month (possibly August 29.)* The full Deadmau5 album is set for release September 25. XoXo c. UPDATE: 7:57 p.m. EST Just noticed the below trailer, possibly for the video, via My Chemical Collective , a new webzine. The video description says August 29*. Possible video release date? We
2 comments
Read more

Between my digging up arrest reports and generally writing news for Alternative Press today, I noticed quite a few My Chemical Romance happenings. Because of MCRupdate's the recent announcement that she would no longer be updating, I figured I would try to post a little more more here to attempt to make up for the loss. Of course, I'll never be able to keep up at the magnitude she did, but little things that I would normally just tweet then move on, I'll try to compile into an occasional digest so they'll be less likely to be missed. August 8, 2012 Bullet Cable posted a second video interview from MCR guitar tech "Punk Rock Dave" talking about equipment. The awesome thing about this video: It was shot inside what Bullet Cable calls "MCR's secret studio," supposedly that studio the band mentioned they were building in Los Angeles many months ago. Watch the new interview below and the first in the series here . You can see
1 comment
Read more 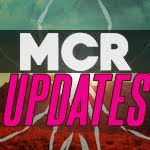 Last night, Taylor from the amazing My Chemical Romance fansite MCR Updates announced that she will no longer continue to run the website. It's no secret that the fan community owes a lot to the site she maintained so passionately and tirelessly for the past couple years. MCR Updates was always fast, accurate, to-the-point and supplied information that squashed rumors and enhanced the knowledge of the fanbase. During my last couple years of college, I had to kind of fall back from tirelessly hunting MCR news, and MCR Updates was always there to help me fill in the gaps. So, this is a thank you to Taylor for all of her hard work, and for all of the times she helped me gather content to post here. This blog also owes a lot to MCR Updates. She created something so special and covered the MCR world we all so care about in such a way that future fans will be able to look back and have an accurate timeline of exactly what was going on with the band during the time she ran t
1 comment
Read more
More posts