Showing posts from August, 2009
Show all

Back to FUCKING Business

August 20, 2009
I know my blog has become quite the dead zone over the summer, but here's the deal: I finally got functioning wireless internet, and I will be going back to school soon; so, this bad boy is about to start jumping again. Miraculously, I have gained about 10 followers during the summer months. You guys are in for a shock when you see how this thing is supposed to be functioning. I'm ready to get into this shit 100% again. Are you? XoXo c.
Post a Comment
Read more

My Chemical Romance to Play Soundwave 2010!

Earlier today, Bombshellzine.Com announced the lineup of this coming year's Soundwave Festival in Australia, which is to include none other than My Chemical Romance. Soundwave Fest, if no shows arise before it, will be MCR's 5th performance since their hiatus. Soundwave, which will take place in February and March, 2010 has five scheduled dates: February 20th - Brisbane February 21st - Sydney February 26th - Melbourne February 27th - Adelaide March 1st - Perth Hm. The March 1st show is the day before my birthday... Anyone up for giving me a really awesome gift? ;} The lineup also includes acts such as: Faith No More, Jane's Addiction, Paramore, AFI, Taking Back Sunday, Sunny Day Real Estate, All Time Low, and Anti-Flag among many others. Is anyone going? Drop me a comment! XoXo c.
4 comments
Read more 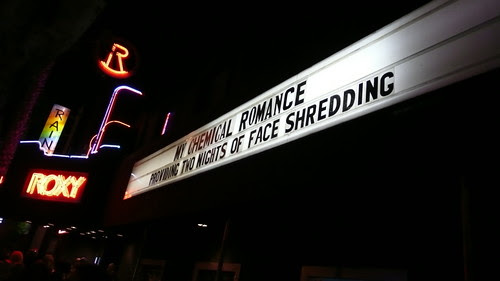 As I mentioned in a prior blog, MCR played two intimate shows at The Roxy in Los Angeles this past weekend. Fans were treated to "two nights of face-shredding" as the marquee reads. Lucky fans who were either invited to the show personally or who won tickets from KROQ got to witness the band's first performance since their hiatus along with the debut of three new songs from the upcoming MCR album. "Kiss the Ring / LA Heavy" "Death Before Disco" And "The Drugs" The upbeat, swing-esque vibe of the new songs is reminiscent of past songs such as: "House of Wolves", "Headfirst for Halos", and "You Know What they Do to Guys Like Us in Prison". I can almost guarantee that, over the upbeat music, bleak lyrics are being sung as is signature for My Chemical Romance. Afterall, Gerard did describe "Death Before Disco" as "an anti-party song that you can party to." Get stoked, kids. Exci
4 comments
Read more
August 01, 2009
I'm getting lots of juicy details from the L.A. MCR shows including recordings of three new songs. Update coming soon! XoXo c. PS: The new songs sound great!
Post a Comment
Read more
More posts