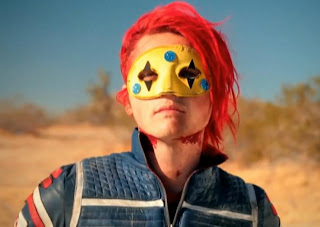 My Chemical Romance frontman Gerard Way called in to Kerrang! Radio and explained the inspiration behind Danger Days: True Lives of the Fabulous Killjoys.

Way says that what he loves about the bands upcoming album is that "there's not really a story to follow," a definite change for a band that is known for its concept albums.

"This record, you can just turn up really loud, and enjoy it in a different way. There's obviously meaning in every song and I'm speaking very directly to the listener, but there's no story to follow. The real story this time was the journey we took to create the album."

"It is definitely a record to listen to from start to finish, but I think it's one of those things that you'll find a favorite song kind of every other time you listen to it."

Regarding the band's drastic, colorful image change, Way said it was something the band had really wanted to do.

Way feels confident that fans will take the change well.

"I feel like the selves that we're rebelling against are the guys who went in to make that previous attempt. It wasn't the guys making ...Revenge, or the guys making ...Bullets... and ...Parade. We're basically gunning for these guys who had made this attempt at this 'rock record,' and what we ended up with, in my opinion, is something that is far more of a rock album in terms of its spirit. It does sound like a band that's free and rebelling against something."