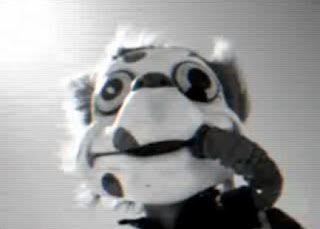 A new video has been added to My Chemical Romance's Youtube channel.

The video, first posted by Dr. Death Defying, one of the mystery Twitter users associated with My Chemical Romance, then later by vocalist Gerard Way, is a mere 16 seconds long and shows a suited person in what appears to be a mouse-hybrid mascot-head wandering the same desert scenery that has been added to the band's official site and that has been described in recent tweets from the strange Twitter accounts.

What do you make of it?

If you're a proud MCRmy Soldier, Gerard has a mission: "How much can you boys and boys and girls blow this up- or do we have to lip-sync?"

Following the poor showing that was the VMAs, I feel this is certainly worth some blowing up! My raygun is fully charged, and I'm ready to take this as far as I can. Are you?

Katie Pop said…
The tube in the mouth reminds me of Frank's TBPID! mask.


And it seems that no matter how much we try to circulate the video... the counter remains frozen on 306.

And also, the only tag on the video is MK. Mikey? I dunno, but the skinniness of that mouse-dude would point to Mikey.

Anonymous said…
well you hav eno idea how happy i am!!! and excited, i could run around the whole houes now! i mean its moving pictures now! XD but i can't watch it my youtubes down right now, bummer
September 14, 2010 at 2:31 AM

Anonymous said…
okay it works now! to me it seems like its either Mikey or Gee. im gonna guess Mikey the most, cause the person looks kinda pigeon toed and M. is a little haha.
September 14, 2010 at 11:15 PM