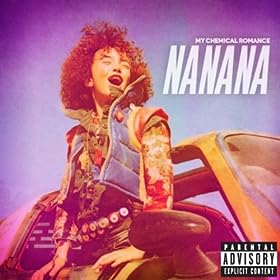 Vocalist Gerard Way explained to BBC that "Na Na Na..." is the song that changed everything for the band and motivated them to start over.

"Everything up to that point had felt like we had been in this kind of stasis, and as artist, stasis really equals death. It was so bad, the vibe wasn't good, and then "Na Na..." happened and all of the sudden there was this real, big intensity underneath us, and it was the momentum that we needed to dig deep and record another album. To me, the power of the song was how it propelled all of us, and that's kind of how we hope to propel everybody else."

"It took a little while to figure out who and what the band is, and kind of re-embrace that as apposed to turn our backs on it."

In reference to the upcoming album, Danger Days: True Lives of the Fabulous Killjoys (November 22), Gerard explains to KROQ that The Killjoys are "us, the fans, our friends, it's everybody that's important to us."

And their triumphant comeback? Way tells BBC, "We all kind of feel like we get to really start our lives again right now."

A heads-up: Be sure to listen to that stream; as, it plays at the intended audio quality. Rips from other outlets have blips in them and are lower quality.

Download the audio of the BBC One interview from the ever-splendid MCR Brasil.

Anonymous said…
I give love to Radio 104.5 :D
Especially that the radio station is located in the Philadelphia area, my hometown.

The song was AWESOME! I don't think I will be functioning normally throughout the rest of the week.
September 22, 2010 at 7:43 PM

Anonymous said…
No...104.5 said they were premiering it when in fact it was a leak of the song.

Anonymous said…
the boys are back! and im gonna definatly say Dr. D the vid is definatly Steve Righ? because he;s the guitar player of Mindless Self Indulgence and it fits when you say it in your head. i love how they bleep gee out so much its like holy crap man how much do you have to swear XD but i know its for a purpose. and the interview and interviewer is cool :)
September 23, 2010 at 2:21 AM