"Na Na Na," New My Chemical Romance Song to be a Part of Sims 3 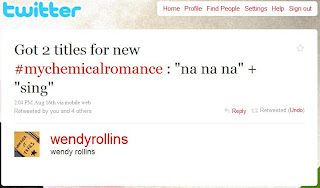 On August 16, Wendy Rollins, a D.J. at Radio *104.5 in Philadelphia, tweeted and confirmed that new My Chemical Romance material had been sent to stations for airplay consideration. Her tweet, which came well before vocalist Gerard Way's cryptic "Look alive, sunshine" tweet, lists "Na Na Na" and "Sing" as song titles from My Chem's upcoming album.

Also confirming the "Na Na Na" title is an article from Music Mix, which reveals that My Chemical Romance have recorded the song in "Simlish" to be played from virtual jukeboxes in The Sims 3 Late Night expansion pack, which is set for October 26 release.

*Later edited: I had originally made the typo "104.4." I apologize.
Artist: My Chemical Romance

Ritthaa said…
I know right? It's been ages since Black Parade came out. When the new album comes out, I'm going to have to take a day off and put it on loop.
September 4, 2010 at 6:41 PM

Sexy arabic said…
Its good to hear that Black Parade going to release new album I am anxiously waiting for it as its been ages since they came out : Sexy arabic
September 8, 2010 at 11:16 AM