My Chemical Romance Website Returns with News, Desert Imagery and traces of Killjoys 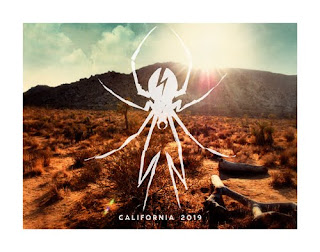 After three confusion-stirring days of its morphing unexpectedly into a page displaying a television with various changeable channels, the My Chemical Romance website has returned to its old self with some minor changes.

A desert-scene backs a blog post, "To Kill a Demon Shark," from guitarist Frank Iero that announces the final limited-edition print of his ongoing series and the birth of his twin daughters, gives a better look at the MCR-designed Guitar Hero strap and warns us, as we have grown accustomed to being warned lately, to "look alive."

The print, titled "Satan Save The West Coast Cause God Wants Us Dead," displays a desert scene, possibly a more distant shot of the background image location, overlayed by the text "California 2019" and a white spider-- the one widely recognized as the logo for The True Lives of The Fabulous Killjoys, the comic series vocalist Gerard Way announced he was working on in July 2009 and said would not come out this year as he had previously planned.

The spider was also recently spotted on Way's painting, "Yellow," which was featured at Alternative Press' July art exhibit in Los Angeles. As Frank's post reveals, it is also on the guitar strap the band designed for Guitar Hero: Warriors of Rock.

All the desert imagery aligns with the post-apocalyptic rants and raves of the My Chemical Romance Mystery Twitter Characters, who have been painting themselves into what appears to be a sand-filled dangerzone.

For those who enjoyed the mystery screen that occupied MyChemicalRomance[Dot]Com recently, you can still find the interactive television under a tab called "Transmissions."

PS: Completely by coincidence, as I was playing along with the characters, I posted this about a spider when I woke up. Strange.

Also, if you're interested in speculating with me, I've posted a "conspiracy theory" post about the spider.
Album: NEW MCR ALBUM Artist: My Chemical Romance

Cassie The Venomous said…
I saw "Lacrals" at first too, but I believe it's actually "Jackals."

Kind of interesting if it is "Philly;" as, the radio station that posted about the new songs is in Philadelphia.

anomnyous said…
im gonna guess the Spider is the key to everything on this album, ya know like the logo.

it could be the thing all the "characters" are trying to kill with all they're acids and bombs (the stuff they tweeted) and that caused the apocalypt (i think thats how you spell it XD) and they're the only ones left to bring it down. IDK 0.o

Anonymous said…
I have another theory. It concerns the transmissions site. Someone noticed that on the unumbered default screen channel (the blank one) you can make out the number 8. I saw it too. My vision sucks so maybe someone who can magnify the images can do a better job. I think that maybe there are numbers hidden in all the channels. They tell you which channel to tune into next. So from the blank channel, you go to #8 since the eight on it directs you there. If you cycle the channels in the right order...maybe..I dunno..something happens? 0_o
September 10, 2010 at 11:25 PM

Anonymous said…
um can you tell me where on the blank screen the number 8 is (like top left corner, ect) i can't find it but there's a spotch in the top right corner, is that it?