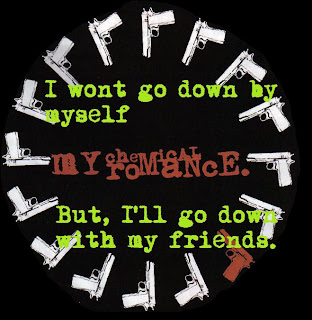 I haven't known them very long, they didn't save my life, and I haven't been to a concert... I'm not a very good fan

Being an active member of the My Chemical Romance online fan community and running my own MCR chat, I see this a lot.

It honestly breaks my heart.

The members of My Chemical Romance, from the beginning, have been creating a supportive community of people who can relate to one another through music when it is hard to relate to anyone else. MCR's music speaks to people and brings people together. A My Chemical Romance fan is just that- a fan with a love for the band's music. Or, at least, that's how it should be.

Unfortunately, there is a degree of unspoken elitism that some exude over other fans, contrary to the band's mission to give us a community where we are equals.

I've decided to try to combat this evil force, whatever it may be. My first step was creating #MCRchat on twitter, which has had beautiful results and has shown that fans come in all shapes and sizes, but - in the end - we all have a common ground, and we can support one another.

This is my second step. This is for newer fans and older alike, but it's mostly for those who are new and insecure in their fandom.

Everyone has to start somewhere, and it is no one's fault that they were born later than another person. I talk to many young fans who would have died to have seen MCR in their "Revenge-Era," and the only reason they missed out was that they were simply too young at that time.

I started liking My Chemical Romance as a sad and lost 14-year-old girl in 2004, who found solace and something uplifting and inspiring in MCR's music. I was fortunate to have found them so early, but knowing about this band for 5 years or for 5 months does not define a fan.

So, here's the deal: I do not want to keep everything that I have learned in my years growing up with MCR to myself. For those who were not there, I want to pass along what it was like during that "Revenge Era." I want future MCR-lovers to be able to know this as a part of MCR history and to feel included in this fan community. I was a new fan at one point. We all were.

I plan to post reviews (written in the time period of the show) of all the MCR shows I have gone to, starting with the earliest and working my way forward in time.

I would encourage all other "older" MCR fans to come forth and share their experiences as well. I think we have an obligation to keep this alive for future fans and to help welcome all new fans.

hilariousity said…
Thank you! I'm a fan from the very late Revenge-era but I've never had the chance to see them then. I've seen them six times for the Black Parade and I've met some wonderful people every time. I congratuate you for wanting to spread the love I've had the luckiest experience of having with the fans.
November 11, 2009 at 1:55 AM

ChemicalKiller said…
thanks to people like you, i'm a proud mcr fan and i am still alive cause they saved me ^^ they are my fave band since april (i know, i'm a really new fan, but i already know likeverything about them)and they already saved my life like 10 or more times :D thank you all for saying welcome to the new fans *-*
November 11, 2009 at 5:18 PM

Annie said…
I've been a fan for about a year now and I've never seen MCR, and I constantly get intimidated by people in the MCRmy who seem to know EVERYTHING about them (although I know a lot) and have been to like 30 of their shows o.O It's good to see things like this.
December 8, 2009 at 3:46 PM

Sue-anne said…
I've been a fan for around two years, since 2007 I think. They came down to perform that year, but I couldn't go because my family was taking a trip down to Europe. But I think that fans of MCR doesn't count on how many shows you've been to, or how many merch you own, but if you love their music, and get their message, I suppose it's enough.
December 17, 2009 at 1:59 AM

Anonymous said…
"I talk to many young fans who would have died to have seen MCR in their "Revenge-Era," and the only reason they missed out was that they were simply too young at that time." yeah, that was me for a long time.

I listen to them since late 2007. at that time, in my country, there was a period where all the fans were super excited about them because, MCR was going to give a show in Santiago, Chile. Fans clubs started to get crazy, they closed the only doors we (new fans) had to get closer to the band, the girls who were in charge of the clubs decided that, so we culdn't did anything. I was like "it's okay, but i really want to be with other fans, cool girls, and they closed the doors in front of my face.." a lot of that girls are the kind of "you are not a fan if you aren't on a fan club or whatever"..so... i went to the show by myself with 2 friends. when I went to the bathroom to get some water, there was like..six girls saying/crying "my mom was right, this band doesn't worth it, I want to go home" and they were wearing the fan club shirts, that was the second when I realized "you don't worth it, honey, go home!"

my point is... if new fans think they are not good fans just for not being part of a club, or for not going to any concert yet, please, think again. if you love them, their music, the message, YOU ARE a true fan. you worth it!

Allison Kozik said…
To be honest, this is exactly the way i'v felt, and sometimes still do feel. I've litterally only been listening to them for months, and my past, reguarding MCR, isn't very pretty, or one i'd like to share. but i have realized that i feel like i get looked down on alot. UNTIL i realized i was only looking down on myself. that older MCR fans want newer fans to feel the way they do, go through the expiriences they did. i want that to be me someday...

but i have felt this way alot...just because the band has such a rich history. people think it's kind of creepy to learn 8+ years of a band in three or four months.. but it's because i craved knowledge...i thought knowing everything about them would make me more accepted by the fans.

THAT was before i joined the MCRmy..where i realized all i had to be to be loved was myself. and i do consider the MCRmy my little internet home-away-from-home, and not so sound like a complete suck-up, but even Cassie has inspired me. I think i told you about you being an inspiration for me a bit, and i love your blog..so i decided to ask my english teacher to recomend me for a journalism class next year. i never would have thought about that until i realized what journalism can be and how it can reach people.

That is so awesome! :'} I'm so flattered and feel honored to know that I could help you find an interest in something that means so much to me.

People like you let me know I am not working in vain... That I can reach people means the world to me.