Originally posted on March 11, 2005 on GreatestJournal.Com

DISCLAIMER: I wrote this when I was 15 and have edited very little... Just saying. 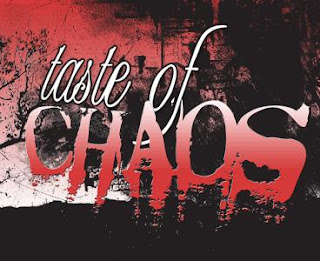 We go back to Monday night around 1:30 A.M.. I am sitting in my room with an insane grin on my face discovering new bumps and bruises everywhere on my body

"God, I wasn't even on the floor. How the hell did I get all these?"

My mind springs back, recalling almost passing out from exhausting myself during "Thank you For the Venom."

So, I woke up the day of the show and was completely and utterly excited, knowing that later on I would be seeing my beautiful chemical romance. I bathed and picked out the more comfortable of my MCR shirts and threw on my pants, only to discover that my mom wasn't going to drive me to Hara Arena (in Dayton where Taste of Chaos was) until later. I was impatient and antsy all day. I knew my friend Emily was going to wait in line around noon, and I had to wait 4 more EXCRUCIATING hours to get there.

We picked up my friend and FINALLY got to Hara. I found Emily WAY up in the line and my friend and I made our slow journey toward the very back. Nothing much happened while we waited, but we got free Taste of Chaos editions of Revolver Magazine that people were passing out. It kept me occupied for about 20 minutes. HA!

We saw many pretty "emo boys" and met these randomers in a band from Florida. Gerard came outside and was talking to this radio station in a tent outside the building. I wanted to run up there, but I thought it was just something people were saying to get us to lose our spot in line. Sadly, it wasn't. Oh well...

Then, out of nowhere, the half of the line that I was in started making this mass exodus toward the front of the building. THEY FORMED A THIRD LINE!

When we got in, we were fortunate enough to score AWESOME seats to the left of the stage. Ah, god. it was FUCKING AMAZING!

Senses Fail played first. I don't know really any of their songs but they were good.


Then Killswitch went on. They were awesome. The guitarist had on booty shorts with these silly-looking boxers hanging out of them and tights underneath, he was hilarious.

A more memorable line from their performance was the guitarist proclaiming: "This next song goes out to all the hot girls in the audience with braces... FOR KEEPING IT METAL!!"

I don't quite remember, but I think A Static Lullaby Played, then Underoath then... *drumroll*

Ah, everything was silent; then, BOOM! Like a cloud from heaven, a blue light shone on the right side of the stage and there floated Ray Toro's fro!! *dies* Then BOOM Frankie. BOOM Bob. BOOM Mikey then *EXPLOSIONS* GERARD!!!

Then the familiar guitar from the beginning of "Helena" met my ears, and I lost my freaking mind. Gerard opened his mouth and within "Long ago.." I was gone. I recorded a bit of it on my cell phone. That's the only thing that kept my mind there.

Out of nowhere, like a crazy man, Gerard screamed between songs: "DO YOU WANNA FUCK ME!? I CAN'T FUCKING HEAR YOU! I SAID, DO YOU WANNA FUCK ME!? Do you wanna cover my head with a pillow and take a knife to me and twist it until I BEG you to stop? NOW, DO YOU WANNA FUCK ME!? FUCK YEA! WELL, I WANNA FUCK YOU!" I managed to get this moment of madness, his introduction to "Honey this Mirror isn't big enough for the Two of Us" recorded on my cell phone! Randomly, in the middle of this song, Gerard got down an humped a stage monitor for like 3 minutes. I was in complete shock. Ha-ha!

After that he was like, "SUCK ME OFF! SUCK ME OFF! If someone ever says to you: 'SUCK ME OFF,' I suggest you don't, because you get NOTHING but a very nasty taste in your mouth... THIS SONG IS ABOUT GUZZLING DOWN A WHOLE LOTTA POISON: THANK YOU FOR THE VENOM!"

I bout fell over right then. My favorite song! I screamed and yelled and I had the aisle seat so I could jump wonderfully. Mid-way through the song I thought I was going to either die of heat exhaustion, be drowned in sweat, pass out from lack of oxygen or all three.

Even though my arms were about to fall off and my whole body was wringing wet with sweat and I couldn't breathe and was sure I was bleeding, I couldn't calm myself. I could see Gerard Way, my hero and role-model. Right there in front of me. I could see the red make-up around his eyes, I could see his tiny teeth, every curve of his face and that amazing bat belt he wears!

"Here comes the bride, Here comes the bride, All dressed in white..." YAY! Sung in a creepy voice, this is the way Gerard intoduced "To The End." I felt myself giving out in the midst of that song; so, I stopped... a little bit. I was able to cool off, because they played "Ghost of You" next, and I obeyed Gerard and lifted my cell phone high and swayed.


Then they played "Cemetery Drive". I accidentally recorded about half of it on my phone.

I think that's the point when Gerard started the chant "YOU CANNOT DESTROY ME!" Ah, it was awesome.

Yup then it was "Cemetary Drive", I was right.
Afterward, Gerard was like "Now if any of you FUCKERS don't agree with anything I'M saying, you can do one of two things. YOU CAN FLIP ME OFF OR YOU CAN TRY TO MAKE YOUR WAY UP TO THIS STAGE, PASS THE SECURITY AND KNOCK ME THE FUCK OUT! And that does not go without reward. OH NO! You will get a prize. YOU KNOW WHAT THAT IS?! A NIGHT IN FUCKING PRISON!!!" Introducing the song, "You Know what They Do To Guys Like Us In Prison"

There was more chanting of "YOU CANNOT DESTROY ME!! YOU CANNOT DESTROY ME!!!" Then I was saddened, because Gerard announced that it was their last song, and they played "I'm not Okay," but my sadness didn't hold down my insane energy that I somehow managed to keep up throughout the whole performance.

So, they went offstage and I could hardly sit back down I was so excited. I soon found that I had ABOSLUTELY NO VOICE WHAT-SO-EVER when I tried to talk to my friends. When I did talk, it sounded like I had strep throat and had just sucked about a kilo-liter of helium.

Anyways we waited for a bit then...

The first song they did was "Take it Away," and I went crazy again, but not to the point of almost passing out as I had before.

Bert, the lead singer, was really random between songs. He was like, "I just want you to know that after the show, I'm having sex with EVERYONE! Even these guys down front in the yellow!!"

Quinn rapped and he and Bert hugged for, like, ever. And Bert made Quinn play this little thingy on the guitar like 3 times so that he could dance. Quinn did it once and Bert danced and was like "Wait, do it again! Do that funny little thing again!" and he danced, then he was like "One more time. They love this shit!" He called us a "Rowdy bunch of Motherfuckers" at least 4 times.

They played all of their singles and some more unfamiliar songs, but it was all awesome.

Just when everyone thought the show was over... MCR and The Used came back out onstage together to perform their tsunami benefit cover song, their cover of "Under Pressure." AND THEN *thanks all higher beings for this* GERARD AND BERT KISSED!

*cries* Almost as soon as it had started, it was over...

I ran out, bought a shirt that is like 6X too large for me and went home to go to school the next day and discovered ungodly amounts of bruises and scrapes and sore spots. That's how out-of-it I was... I didn't even realize my knees were crashing into the chairs in front of me or that I was getting all banged up. School the next day was a painful hell.

I'd like to note some specifics that were FAR FROM my mind when I originally wrote this.

2005's Rockstar Taste of Chaos was the very first year of the tour, and - oh yea - this was my first "real" concert. This is what started a full-on addiction.

Next Week's classic review:
Green Day and My Chemical Romance