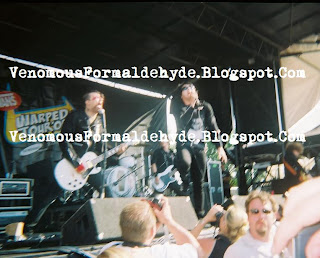 
Today I went to Warped Tour, got there around 9 and was at the main stage by 10, in the front and hugging the barricade for dear life. All of the bands were good (Underoath, The Starting Line, Hawthorne Heights, Atreyu...), but I was waiting for the real treat at 5:45 -- My Chemical Romance!

After Strung Out finished their set, I could feel the pressure of the crowd go way up and was even popped out of my place at the barricade (though, I was still holding it). Everyone was gathering for MCR.

Bob came out and started testing the drums. No one seemed to notice that it was him beside a few of us in the front who were yelling to him. I got a few pictures of him then I saw Frankie walking around behind the stage with his strange, new make-up: Red streaming from his eyes like blood and half of his face and lips painted blackish. It was different.

Finally MCR went on, and my arm became permanently stuck at the barricade between a bunch of people, rubbing back and forth painfully (I have HORRENDOUS bruises). I swear within, maybe, a minute, I was completely suspended in the air, my feet not touching the ground, held by the pressure of people around me...

It was the roughest the crowd had been all day, and I LOVED it!

They did "I'm Not Okay..." first then "Our Lady of Sorrows" and I was lost at that point... I must have looked awful, because I had my head tilted back, eyes shut and knew I looked like I needed to get out of the pit.

At one point a security guard asked me if I were okay, and I nodded... I waited until the end of MCR's set (it ended with "You Know What They Do To Guys Like Us In Prison"), and I must have blacked out; because, I don't remember them leaving the stage or anything. I felt fine after that, but I didn't feel like trudging out through the crowd; so, I tapped the security guard in front of me, lightly in my exhaustion, and had him lift me out.

I swear I felt fine, but I'm REALLY dramatic. So, I staggered (because I'd been on my feet all day) to the sidestage barrier to meet my friends and the security guard grabbed me by the arm and said, "No, no, no, no no, you're coming to first aid."

I opened my mouth to protest, but found I couldn't then realized that he was taking me under the stage, and straight toward Gerard Way's ASS, may I add. LOL.

We emerged from underside of the the stage, and I yelled out in this horrible, desperate-sounding voice (from exhaustion) to Gerard as he was the closest person to me. He turned around, holding the cigarette he was smoking, and frowned as he watched me collapse onto Bob's freshly-unloaded drum set and bust open my knee. Of course, the security guard had to lose his grip on me when my favorite band all decide they're going to respond to the name, "Gerard" and turn around to see me looking like an ass. Gerard had this really worried expression on his face; I probably scared him. LOL.

My heart broke as the security guard drug me away toward the first aid tent, eventually putting me in a wheel chair and rolling me over. I was fine, I swear! and they were taking me away from MCR...

When I got to the tent first aid people put an icy towel around my shoulders and got my information... My lip was trembling and my eyes kept going out of focus.

When I told the first aid guy I was fine, he asked me to squeeze his hands and I did, then he asked me to hold out my hand and it was shaking uncontrollably. Maybe I wasn't so fine? Or maybe I was just shocked at seeing the guys of MCR standing FEET from me.

So, I sat there, staring miserably in the direction of MCR, my heart shattering, seeing them right there and not being able to go to them. I asked the first aid guy if I could go meet them and he wouldn't let me go anywhere until my mom signed a paper for my release... I nearly cried as I continued my miserable, longing staring.

Then, like a miracle, Gerard started walking toward the tent. I yelled to him and he looked over and waved and I brandished "come here." He looked around nervously and asked one of the first aid people if he could come in the tent and they let him in and I was like, "Can I have a quick picture?" and he was like "Yea, of course" and wrapped his arm around my ice water towel clad shoulders. I handed my camera phone to the first aid dude (lol) and flung the towel off of my shoulders, apologizing for it: "Sorry 'bout that", Gerard was like "Nah, that's alright" and we got our picture taken. I thanked him and he told me, "No prob. Get well, okay?." I nodded as he walked off.

After that, Gerard talked to some other fans in the first aid tent and I took random pictures of his awesome bulletproof vest (creep), then almost as soon as he left, Mikey came walking past the tent. I yelled to him and he walked up smiling. I asked him for a picture, same schpeel as with Gerard and he was like "Hope you, uh, feel better."

Ah, it's so surreal... I'm mad that I didn't get to meet Bob, Frank and Ray. They were feet away from me, but first aid wouldn't let me go anywhere. A golf cart came to pick me up and took me back to my car; then, I left.

I was bummed that I didn't get to go back inside, but I had seen My Chemical Romance and met two of them!! That's all that mattered.

After this, I attended the 8-8-05 Warped Tour in Charlotte, NC. I can't find my review for it at the moment. I'll keep searching so I can post it next week.