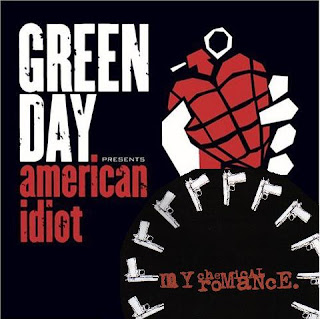 As I warned last time, I was fifteen when I wrote this and edited only minor mistakes; so, there are probably many errors and things that are liable to make you raise an eyebrow.


Last night, I saw Green Day and MCR in concert!

Very few people were there when I got to the venue and in line. My friend and I got in quick, found our seats and sat down to wait for the show to start. As we were sitting there, we realized that -- from our seats (which were AWESOME) -- we could see backstage.

Suddenly, Mikey Way went walking by beside the steps to the stage, and I'm, like, freaking out, wishing I could jump from my seat and run over to excitedly meet him (which would result in startling Mikey into having an asthma attack and Gerard's running up with his inhaler to save his life {yea, I've thought this one out}), but I resisted temptation. As I looked around, I saw that I was the absolute only person who saw him walking around down there. Of course, some people may have seen and not recognized him or not cared. But whatever. All is well. I still say I should have run over there. Too late now.

By the time 7:00 (My Chemical Romance time) came, virtually NO ONE was was in the arena (there were only about 20 people total sitting in the section where I was)! I mean, like NO ONE in my whole section stood up for MCR except for me and some kids at the bottom. Naturally, I was LOSING MY MIND, and everyone was kinda like, "What a freak!"

We were in the section closest to the stage; so, I guarantee that if the guys ever looked up into the crowd, they would have seen me: this tiny moving mass among still-standing fools and evil, disrespectful people who sat down. Yea, yea, wishful thinking, I know. It makes me feel special. So shove it!

and more, but I was completely out of it!


It was awesome. Especially since we were so close and got to see everything in high (sometimes graphic) detail-- for example, when Gerard decided to rub himself and make dramatic moaning sounds.

I have Gerard audio recorded spewing the most random randoms between songs on my phone along with the end of "Our Lady of Sorrows" (I keep listening to that recording, because it's a really muffled one. All you can hear is "JUST BECAUSE MY HANDS ARE AT YOUR THROAT!!") and the beginning of "...Prison."

After MCR went off, I went to the bathroom with my friend then back to our seats and I watched, with an angered expression on my face, as people mobbed into the arena, wondering why in the hell they weren't there an hour ago when God (and by God I mean 5 guys, and by 5 guys I mean MCR) was playing.

Suddenly, this person in a pink bunny suit comes stumbling out onto the stage, chugging beer and "drunk-hopping," dancing to YMCA and "Blitzkrieg Bop." and then -BOOM- GREEN DAY!!

I'll admit that I'm not the biggest Green Day fan, but they put on one hell of a show. I swear, it was insane. I've never heard something so loud as the screams coming from the audience when the band first came onstage. I can't even describe their vibe, because soooo much happened.

At one point, Billie Joe Armstrong teased us all, making the audience obey him and repeat the most random things after him in order for him to... take his clothes off. HA!

Green Day 'created a band' by having random kids from the audience come play onstage with them. The kid who played guitar even got to keep it!

There was fire and lights and air-humping and "We are the champions!" and extremely long note-holding on Billie-Joe's part when he tried to get the audience to match his chanting of "AYYYYYYYYY-OOOOOOOOOH!"

I can't even describe... Much too much happened for me to give great details.

Please also read my purpose behind this blog series.

Keep an eye out for part three! Warped Tour, 2005 when I met Gerard and Mikey!

Anonymous said…
OMG UR SOOO LUCKY!!! right now i cant decide whos hotter ,billie or gerard... ut MCR and Green Day are my favorite band and i was wondering whos better in concert. ok now im talking to u like ur oprah soooo awesome blogg
December 12, 2009 at 6:55 PM