The Digital and the Dying 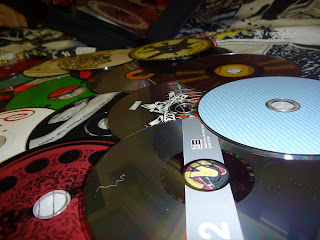 The writer of a 2006 Washington Post article on the closing of Tower Records described the changing music industry saying, “Anything that can be squeezed down to ones and zeros and moved around at the speed of electrons doesn't have to be stacked in plastic cases, shoved into bins and splayed over aisles under fluorescent lights anymore.”

For artists, labels and small record store owners alike, music has become something that can't be bought solely in physical form. It is no longer defined only by CDs, cassettes, or even vinyl that came before those formats, but – most commonly now – by bytes, bits per second, and digital properties that music fans see scrolling across the faces of their various MP3 players.

Jeff Watson, who has worked at Warner Brothers Records for eight years, has personally seen the negative effects of this change in the form of online music piracy.

“Since I started at WBR, I've watched physical sales go down each year, while file sharing has increased significantly,” said Watson, Vice President of New Media for WBR, who admitted that illegal downloading can't be the only reason behind decreased physical sales. Watson said that downloads are, however, a chief reason behind the decline.

“You can make a causal connection between the increased availability of free music and the massive drop of physical CD sales,” Watson said.

The Record Industry Association of America says that for illegal downloading, “piracy” is a “too benign term that doesn’t even begin to adequately describe the toll that music theft takes on the many artists, songwriters, musicians, record label employees and others whose hard work and great talent make music possible.”

“In the long run, illegal downloading hurts the artist - they are not getting paid for their creative work," Watson said.

In addition to its effect on CD sales and the creative minds behind music, Watson believes that illegal downloading has caused a disconnect between fans and their music.

“I think illegal downloading has created an expectation that music as a whole is free, and it's devalued the experience of investing in music and feeling like it's special,” he said.

Another issue that surrounds illegal downloading is the quality of sound that the downloader receives from illegal sources.

Ty Owen, an advocate for “the digital world and the digital environment” of music and music director at Ohio University’s All Campus Radio Network, is a senior media management major with a focus on digital media who is well-versed in downloading and in sound. He lists a few things that can help people “enjoy music a lot more” as an auditory experience, such as buying better headphones and speakers, but also lists avoiding peer-to-peer networks and online album leaks, which he says are often compressed to 128 (kilobits per second) - only a fraction the bit rate of CD-quality audio.

“Sound sacrifice is a huge issue if you’re a layman looking for music on the internet,” Owen said, “A lot of people download new records when they leak (at intentionally lower sound quality) so music directors and magazines can hear them to review them in a lower quality format, which - I think it’s hilarious if you think you can preview the way an album sounds at 128,” Owen said.

Some listeners don’t mind a sacrifice in sound quality if it means they get to have a song for free or get to hear it first.

“A majority of people don’t fucking care about bit rate. They don’t care about sound quality,” said Owen, who accepts only the highest sound quality digital music. High-quality downloads can be found at several online locations, but Owen believes the average downloader wouldn't be likely to put forth the effort to find them.

Digital music and illegal downloading may be lowering the standards some fans set for their listening, but it also causes change on a grander scale.

According to a 2007 Rolling Stone article, when file sharing first became popular, rather than learn to adapt to the change in media and make deals with the first file sharing giant, Napster, record labels attempted to fight it, thus forcing the piracy to spread into smaller and harder-to-manage dark corners of the web.

The music industry, so drastically impacted by the direction of media to a digital format, has had to adopt an adjust-or-slowly-rot approach, which, Watson notes, WBR has taken to heart.

“There's not much you can do to stop file sharing. It's like playing Whack-A-Mole. When you remove one song, another pops up,” he said. “The better option is to offer the consumer what they want: Ease of use.”

In addition to offering easier access to music online, WBR offers exclusive and limited edition items sold directly from an artist’s online store to help make up for the lost CD sales resulting from music piracy.

As for smaller music businesses, those who run local record stores also have had to gain self-awareness. An Athens, OH store owners says that in order to thrive now and into the digital future, they can't continue merely as stores that sell CDs.

“Eight years ago, there were 3 record stores in town, and now there’s one,” said Eric Gunn, owner of Haffa’s Records. “It’s something that’s been happening for a long time."

“It’s a part of the changing landscape of the music industry, and – I think – media as a whole. It’s all being affected by downloading, whether it’s illegal or otherwise.”

Gunn says that the digital world of music isn't something he can fight. He knows that physical record stores that want to survive in a digital world have to make changes.

“Obviously not everyone is going to survive and change, and I think you have to expand into other avenues of income,” Gunn said, mentioning products like movies and t-shirts or stores that function as “strictly vinyl” as possible solutions.

Gunn believes that “a core group of people that like the record store experience” and who recognize the value of and rare finds in record stores, will be the ones to help local record stores survive the digital shift. Owen agrees.

Owen believes he may see “a day when places like Wal-Mart and Best Buy are not going to waste their shelf space on music,” but doubts he’ll ever see the extinction of small, “niche” record stores, where music lovers like him go to support their audio habit. He does, however, have feelings on what we would lose if the digital music world took over and left the physical one for dead.