Bid on a Guitar Signed by My Chemical Romance & Support Animals 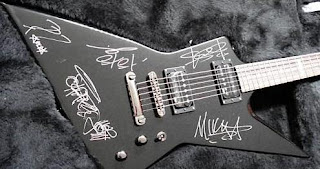 In the past, My Chemical Romance have held auctions that support causes, and they are at it again in support of Best Friends Animal Society, a very fitting charity for the band of animal-lovers.

You can bid on the guitar pictured to the left, which comes with a letter of authenticity, by going HERE.

Best Friends Animal Society works toward the ultimate goal of eliminating homeless animals by finding loving homes for animals that are often considered unworthy of adoption by shelters and society. Their main philosophy is "kindness to animals builds a better world for all of us."

This cause is definitely up the alley of My Chemical Romance, who frequently post pictures of their dogs on their main website's blogs and on twitter. Bassist Mikey Way centers many of his twitter posts around his dog, Piglet; Lead Guitarist Ray Toro refers to his dog Bauer as his "son", and Frank Iero's twitter bio reads "i pick up dog shit all day long, but at night...at night i rock-n-roll," showing his obvious preoccupation with his pets.

In the wake of My Chemical Romance drummer Bob Bryar's tragic loss of his shelter-rescued dog, Dixie, this cause seems all-too-perfect to support for the band and for the fans who have grown to love their pets through them.

If I weren't broke, I would place a bid myself.