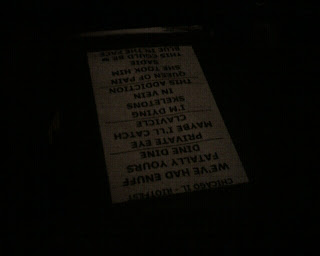 So, for the past few days, I have been living vicariously through the Live-tweeting of Alternative Press, who are at RiotFest, a Chicago-based punk-rock extravaganza.

AltPress just broke that Alkaline Trio played two brand new songs during their RiotFest set tonight at the Congress Theater in Chicago, and singer Matt Skiba announced before the first of the two that the 'Trio has finished recording their new album.

From the set list pictured, it seems that those two songs are called "Dine, Dine" and "This Addiction" or some longer variants of those two titles.

Alternative Press claim they have videos of said songs, and I will post them here as soon as they are available.

... And, more than two-and-a-half hours later, here they are:

The sound quality of the first video pretty terrible, but you can get the general idea.

I am LOVING "This Addiction" already, though.