They're Watching; Always Watching.
(The Picture and Video Blog)

Welcome to Part IV of my Bill and Trav blogs. To begin, I have a guilty confession to make... I lied in my previous post . You see that part at the bottom there, where it says this episode would elaborate on an epiphany? Yea, that's a blatant lie. Wait, wait! Don't leave yet, I can explain! Okay, so next week I will be returning home, and at this lovely home, I have something not so lovely: dial-up internet. So, I wanted to get the meat (soy, of course) of these postings to you before that evil came upon me. I would have a pretty rough time uploading my EXCLUSIVE, AWESOME VIDEO for you on dial-up, after all. Oh, I'm forgiven, then? Gee, thanks. 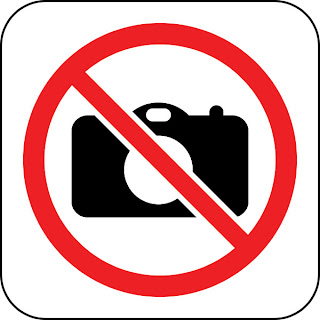 How many of you have shown up to a show with a camera and been told something along the lines of "By request of the [artist, venue, management, etc], no cameras will be allowed into this event"? Probably quite a few of you who probably took one of the following actions:

A.) Ran back to the car to leave the camera there.
B.) Stuffed your camera into a concealing piece of clothing.
C.) Threw the camera down carelessly, because it was just a disposable.
D.) Cried and begged the venue security to let you keep it.
or
E.) Got your batteries taken from you at the door.

It happens to the best of us. Fortunately, Newport in Columbus, where the show I attended was held, does not care at all if a person brings in cameras, and the audience was, therefore, filled with them. Except one camera was missing- mine, for; I was too nervous to bring in my beloved little flash'n'snapper.

But does it really matter if cameras are banned from venues anymore or not? Just as everyone on the internet can become an immediate published writer, anyone with one little device that many of us treasure can become not only a photographer, but a film-maker, music producer, or walking boom-box. Yes, those handy little cell phones that all of us know and love are the devices of which I speak.

This brings up an interesting question for the future of shows with this new, complex media: will we see a day when cell phones are banned from concerts? Or, inversely- will we see a day when all personal media devices are impossible to ban from shows? Digital cameras are even hard to regulate. All a venue can do is take one's batteries, which leaves a lot of room for pictures to be taken anyway, because there are plenty of places to hide more batteries.

Some cell phones can now take pictures and video of the same or of higher quality than some digital cameras, so is having a phone at a show the same as having a digital camera, and is the emergence of picture-phones the death of regulating of what pictures are taken and where? Only time will tell, but I will give you a little sample of some cell-phone pictures and a video in the meantime. The photos are not the greatest of quality, but the video is stunning both in sound and video considering it was taken on a phone with 2 megapixel photo capability. Also considering it was cut short in the middle by a security guard who touched my arm and gently said, "You can't take anything in here." I'm surprised he could tell I wasn't simply texting. 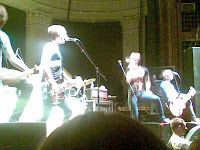 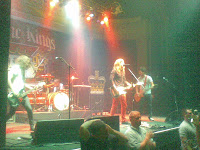 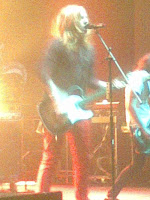 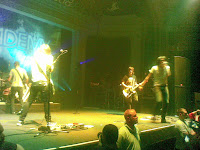 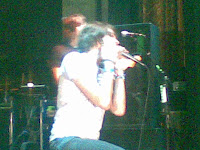 And, for your viewing pleasure, I now present to you my video from the show of William Beckett of The Academy Is... performing an acoustic version of "The Test"

I hope you guys enjoyed and will check in for the next Bill and Trav installment. I'm not even going to give you a teaser this time, because I might change my mind, then you'll all call me a "liar" again. How mean that was of you! :[

::Navigation::
Click here to advance to the final installment!