The Show Review
Welcome to Part II of my "Bill and Trav's Bogus Journey Tour" blogs. Here, I shall review the show in full for you guys, and more blogs will be coming your way soon where I will examine various other topics aroused in my mind from the show.


So, the morning of November 2nd, I woke at my friend's house without grogginess, for; my excitement had grown in the few hours I slept and replaced any sleepiness that would have normally been there. The plan was for our friend to meet us at my place of slumber for the the night between 11:30 and 12:00, and so it happened. For me, arriving at a show later than 11:30 AM is generally something completely insane (I'm a 4 AM girl, myself), but we were just going to chill and hang back for this one.

We headed to Columbus, ate at Mongolian BBQ, then walked around Easton for a bit. The tour's headliner, The Academy Is... was doing a signing at the Hot Topic there at 3:00, and we got to the store in time to shop before it closed for the meet and greet, but decided to skip meeting the band ourselves, though we had the opportunity to. There were so many fans waiting to meet them, and it was amazing to see them all and wonder how long they had been there, how nervous they were, how excited they were, or how much of a dream come true it would be for them to meet the band. The air was definitely charged as we passed them, and I couldn't help but grinning with excitement for them. Having met the band a couple times already, I knew what would be coming to them and knew they would not be disappointed by the charismatic band members.

Skip ahead to 4:00, we pass the venue searching for a place to park, and the line is still quite short, which is pretty astounding considering how late it was, and that doors opened around 6. We left for about an hour, and -by the time we came back- the line had wrapped around Newport building and was stretching onto a side street. My friends and I were let in early and secured our spots at the side, not wanting to take any of the barricade space from those who had been waiting all day, watched the line file in person-by-person, then waited for the show to begin. 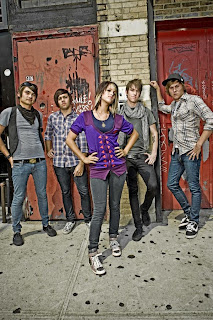 I had never heard a single song by Hey Monday, in fact-- I had never even heard of the band, so you can imagine my slight shock when the petite, female singer walked onto the stage instead of the nearly-expected towering, male front-man. The set was great and very energetic, though- and I hate to do this- it was all very reminiscent of Paramore. With singer Cassadee Pope's onstage movements and even her voice, at times, looking and sounding very much like Hayley Williams. This, of course, is no insult, as; Hayley is an excellent front-woman, and Cassadee is as well. It saddens me that, with their both being a part of the DecayDance/Fueled By Ramen label family and both being female-fronted bands, the comparison will always be there. A highlight of the performance was when the band cleared the stage, and Cassadee returned to it with merely an acoustic guitar. Apologizing for her being sick before she started, she played and sang beautifully. Jaws were quite literally on the floor mid-way through this performance, the audience stunned to silence until we felt compelled -in a wave- to cheer after one particularly difficult vocalization through which the singer soared perfectly. If this is what Hey Monday sounds like with a sick singer, I would love to see and hear them when she is in full health. 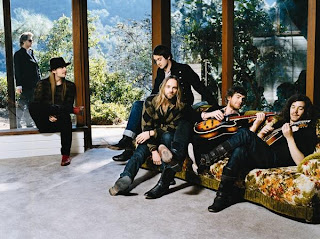 "Oh, no. A gimmicky, cheesy band," thought I when I saw the members of Carolina Liar filtering onto the stage and checking their instruments in matching boyscout shirts. Well, all except for the singer who stood out among them in his navy shirt in their sea of beige. One has the natural instinct to judge a band when the singer looks like Kid Rock, there are more than three guys in the band with hair below their shoulders and who sport beards, but those conceptions of Carolina Liar turned out to be all wrong on my part at least. For one, the band had a keyboardist that didn't play bar jingle tunes, and the band hadn't the faintest inkling of southern rock in their musical style. Well done, Carolina Liar, for proving my misconceptions wrong and for putting on a great show. Also, the band did not- as one would assume from their appearance- speak only of "the chicks and the booze, man," but rather had many inspirational between-song messages for the crowd. Don't be too quick to judge when you see this band. They're great.

Third, were co-headliners We The Kings 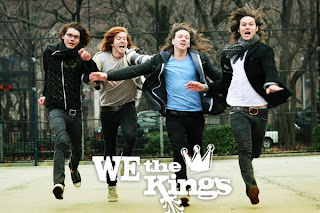 Now, this band is one that has much fuss about it that I have never gotten. Sure, "Check Yes, Juliet" is a catchy song, but there are parts of it that sound like a blatant rip-off of Motion City Soundtrack's "Everything is Alright." Basically, I have seen this band as a hyped-up band that has ripped the style of bands that I loved in 2004. One can't blame them for that, honestly; the first 5 or so years of the 2000s were wonderful for this particular type of music. Except, it seems newer fans are being introduced to that wonderful sound through the recycled material that We The Kings provides. Well, if that's how they're getting into the music, so be it. I would rather our youth be listening to We The Kings than Nickleback any time.
The band proved interesting live and were catchy enough to make me dance, and certainly make the crowd begin really moving for the first time in the night. From where I stood, I could see the whole of the crowd, and the surges were tremendous, especially when singer Travis jumped from the stage and stood at the barricade. The monstrous ocean of fans surged and squeezes themselves as close as they could possibly get to him. A highlight of the set, was when guitarist, Hunter Thomsen, began having technical difficulties during one of their songs, and ended up just putting his guitar aside and jumping down to the level of the crowd to sing with the kids. That's what these shows should be all about. I will veer from this for now, though, for; I have an upcoming blog where I will highlight bands' interacting with crowds and how much of a difference it makes. Another fun point of the set was when the band covered The Gorillaz "Feel Good Inc." Whether crowd members were We The Kings fans or not, everyone could sing and dance along. Plus, when is it even not great to see scrawny white boys in bands rapping?
Overall, I was impressed with the band's performance, and they got an approval stamp in my skeptical mind, and -obviously- many in the crowd had gotten their fill of entertainment, for; about half the audience on the floor left at the conclusion of WTK's set.

Last, but certainly not least: The Academy Is... 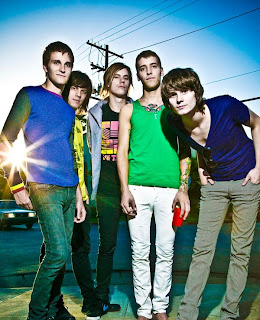 Having seen this band a few times already, I knew relatively what could be expected: a great performance, but I dare say the band has improved since last I saw them, not to mention, their hair has gotten much shorter collectively. I will admit to having a bias already. This is the band for which I came to this show, and this is a band I love. However, I don't love them enough to deny their flaws. But, honestly, it's a rock show: the flaws are what make it. Unfortunately, I spotted no flaws in The Academy Is...'s performance. Singer William Beckett made girls go crazy, drummer "The Butcher" made fun of William-- all went according to plan, and the sound quality was flawless. So, for whomever was working the soundboards on tour, well done, my friend, well done. The band appeased both we veteran fans and newer fans by dishing out an equal balance of songs from each album and alternating them perfectly for changes in pace and mood. A highlight and rare treat for show attenders was an acoustic performance by William Beckett of "The Test" from their latest album "Fast Times at Barrington High" (I will post my video of this soon). The band closed, as is customary for them, with the final track from their CD "Almost Here" and it was absolutely perfect ending to the show as it always is.

My conclusion: this is a great tour to attend, even if you are not a fan of any of the bands. You are guaranteed a great show, and there is something for everyone to enjoy. You will not be bored, for sure.


Thanks for reading, and keep an eye out for my next blog on bands and importance of crowd interaction! Also, there will be pictures and videos from the show posted soon!