November 01, 2008
I am not going to pretend that I am a political person, but the up-coming election was the focus of our J101 class on Thursday, and we spoke of social media and how the candidates have utilized it on their own, but I have something to show you guys that is also bringing politics into the social media spotlight.

I present to you some of my "top friends" on myspace: 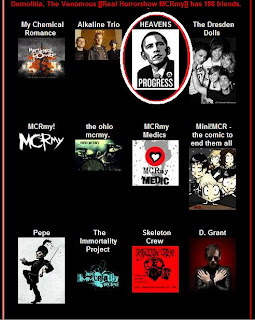 Note that I have circled one of my particular friends. Now, can any of you guys tell me what you would imagine I am and what you would imagine "Heavens" is from this picture? "No:" that's my answer to your thoughts. I'm not an obsessive Obama-supporter who feels the need to tell the world this, and no, "HEAVENS" is not a political group. Heavens is a two-piece band, and those two guys are brilliant Obama promoters. Boom! Suddenly, every person's myspace page with this band on their "top friends" became an ad for Barack Obama.

Think about that, oh you strategists.