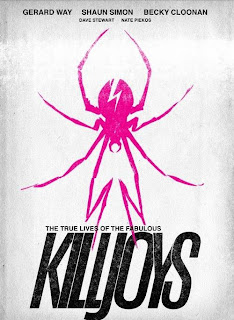 Though we were once told that Killjoys began as a project stemming from authors Shaun Simon and Gerard Way "growing up being in the van," much has changed since its inception.

A far cry from the '90s-inspired, American comic-book feel they had originally intended, the Killjoys of now, according to Gerard Way, Shaun Simon and Becky Cloonan in an interview with Newsarama that was streamed live, is more inspired by the Killjoys world MY CHEMICAL ROMANCE created with their videos for Danger Days: The True Lives Of The Fabulous Killjoys. ("...the comic informed the album, and then the album refined the idea and what the comic would become." - Gerard Way)

According to Way, it is "basically the 3rd" Killjoys video they would have made had they not run out of money, and it's an "expansion on the record."

When Way received a sketch from Cloonan of "The Girl" in the Danger Days videos, grown up (well, somewhat, she was 16), he told Simon, "I think this is the comic."

Cloonan noted that she saw how many people had put their hearts into the Killjoys world as MCR created, and that she creates the world with that in mind!

Get a first glimpse at Killjoys for free on "Free Comic Book Day," 2013 (May 4) and, according to Shaun Simon "issue one [will be] out in June!"

I will post a full transcript of the interview at MCR-TRANSCRIPTS later tonight! Stay tuned!

Newsarama will stream a Killjoys interview with BECKY CLOONAN and GERARD WAY at 6:15 p.m. Eastern.

As this stream will inevitably go down and leave and ugly hole on my blog: Have a screen-cap: 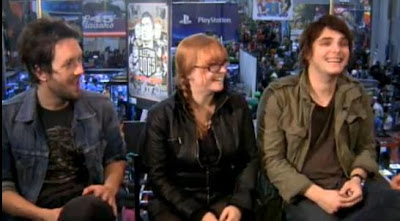 Anonymous said…
Thank you, can't wait for the transcript because I missed the livestream.
October 13, 2012 at 7:39 PM