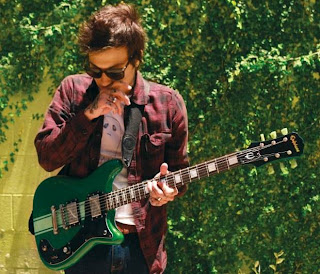 In a new interview with Alternative Press, guitarist FRANK IERO revealed that MY CHEMICAL ROMANCE's still-in-progress 5th album is turning out "fucking elaborate" and says, "There’s a bit of bleakness to it..."

He also makes it clear that the album "isn’t going to sound anything like" his recent contribution to the Frankenweenie: Unleashed! soundtrack; though, that song was the first piece of music recorded in the band's new studio!


In the new interview by (one of my favorite humans in the world) Jason Pettigrew, Iero reveals how he got involved with the Frankenweenie: Unleashed! soundtrack and the inspiration behind "This Song Is A Curse," effectively puts LeATHERMOUTH to rest and semi-reveals what he may be up to at North End Studio these days:

"Last week, I was in a studio in New Jersey that’s owned by a friend of mine. I just went over to hang out, but we ended up having a couple of beers and doing a song. It was the first time I ever did something where I played everything. I’m going back into the studio to finish the track, maybe record another one..."

He expressed interest in possibly creating a website where he can put music out, saying, "I just want to do something I can put out quickly before I overanalyze it..."

As of now, the interview indicates, "MCR 5" is still in a malleable state. Though Iero said MCR had written and recorded many songs, he told Pettigrew, "I could tell you everything about the record right now, and I guarantee that all of it would change tomorrow."

READ THE FULL INTERVIEW AT ALTPRESS.COM