October 25, 2012
Here's an outline of what's been going on in the My Chemical Romance world since my previous "MCR digest" post on October 8.

Note: Apologies for having not updated sooner. Things have gotten much, much busier on my end. More details on that at a later time! 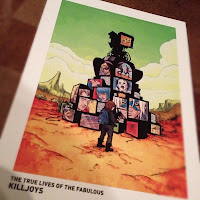 Check out Becky Cloonan's awesome artwork for the comic to the left! (And the pre-coloring version and this awesome Draculoid drawing.)

October 15
The Killjoys crew appeared in this Artisan News Comic-Con recap video, briefly. Check out a more extended interview below: 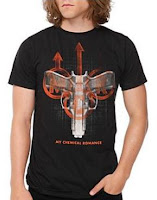 
October 23
So, FRANK IERO decided he was a barber...Or something. Can't wait to see what comes of this! What do you think he's up to?

October 24
The 6th release anniversary of The Black Parade!

GERARD WAY tweeted for the first time since June.


October 25
With the countdown to Conventional Weapons: Number One at 5 days, the tracks "Tomorrow's Money" and "Boy Division" have surfaced online! I will leave it up to you to dig up their locations; as, there are no official streams, but let me say-...

(And so, Cassie The Venomous listened to the songs and  she died. -FIN-)