September 02, 2012
Here's an outline of what's been going on in the My Chemical Romance world since my previous "MCR digest" post on August 21.

With more going on now, I will try to make these posts a bit closer together in the future!
----

August 28
My Chemical Romance's official website underwent a dramatic re-skin, including the addition of a new logo (pictured left).

Fans are to be advised that it is just a routine website re-skin that does not necessarily reflect new material.

However, that does not mean their music may not be a part of the film. They could appear in the larger score; they're just not on the soundtrack, it appears.

An anonymous commenter on my post cites a song called "Hell's Furious Bitches" as MCR's contribution to the film. I cannot confirm if that is valid information or trolling (Ha!), but it's something I'll keep looking into.

August 29
My Chemical Romance's Frank Iero contributes song to 'Frankenweenie Unleashed!' soundtrack
"This Song Is A Curse"! What do you think it might sound like?

--
Details of Gerard's mysterious, once-in-a-lifetime performance at MorrissonCon have been revealed:


"MorrisonCon kicks off in style with a new collaborative project — a one-off, never-to-be-repeated performance created especially for this event. Grant Morrison teams up with Gerard Way and James Dewees of My Chemical Romance for The Con — a thirty minute spoken-word piece with music. Part short story, part history, part occult ritual, as Howard Hughes faces Liberace in a duel to the death for the soul of Las Vegas!"

--
Frank Iero admitted that he is a "packrat loser" on Twitter and proceeded to show off the awesome MCR relics he found while he was cleaning: 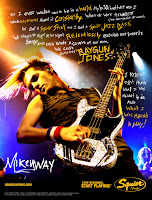 August 30
MCR Data pointed out that Mikey Way is featured on the Fender website, promoting his Squier Mustang bass! 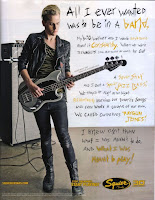 Anonymous said…
I solved the mystery.

I just went to the cinema and watched "the man with the iron fists", because i'm really into hip hop/wu-tang and kung fu (and, hell, this movie kicks ass! totally awesome).

So, clever as i am, i watched all the credits and indeed: my chem are part of the soundtrack. but they are not listed as my chem, just with their usual names: way, way, iero, toro and james dewes.

AAAND, most important, you all can look it up yourself:

So the song's called "hall hath no fury", not "hell's furious bitches". i don't know why it isn't featured on the ost, but i guess it has something to do with labels, rights, contracts and lot of stuff i can't even imagine (Dr. Terminal's sweet revenge)...

Go watch the movie, i actually heard the song. obviously without vocals, guess they just used the riffs in a fighting scene at the end. maybe we will here the complete song one day.

Jorge said…
I also noticed that on the credits, but I can't find the actual song on the movie... I watched the end, but nothing. Could you tell me in what part it is featured? Thanks!
December 15, 2012 at 3:07 AM