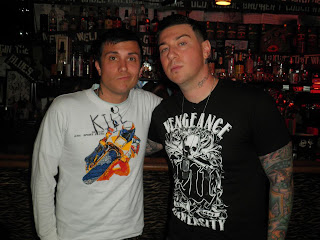 My Chemical Romance's Frank Iero, alongside Zacky Vengeance from Avenged Sevenfold, is set to appear on Fuse's Hoppus On Music next Thursday at midnight (11 p.m. Central, so technically 12 a.m. Friday EST.)

According to the photo description on the Hoppus On Music Facebook where it was announced, the two will be exploring the "Orange Country [sic] music scene."

On March 6, Zacky Vengeance originally tweeted a picture with Frank, presumably from the day of the shoot, captioned "Up to no good..,"

Because the time the episode is set to air aligns, some fans are speculating that it is what Frank's countdown concerns; though, there is nothing to prove or disprove that theory.

Fuse has added video clips from the upcoming program. In them, Frank interviews Zacky Vengeance.

According the the official MCR site, as a part of Hoppus On Music, "Frank goes to Orange County to interview bands that include Avenged Sevenfold, Thrice, and Pennywise..."

Fuse has uploaded two more videos. In one, Frank talks to Zacky about A7X/MCR tour memories and in the other he asks Fletcher from Pennywise about being tased.