Another Possible Glimpse of My Chemical Romance creating Next Album? 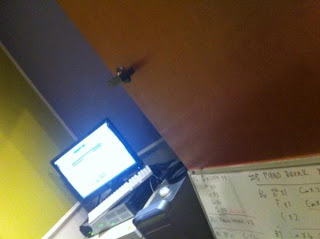 My Chemical Romance guitarist Frank Iero has posted a photo with the caption, "Things is happenink!" that looks suspiciously like it could be (though has not been confirmed to be) My Chemical Romance's working on their latest album.

The photo shows a computer and the top portion of a whiteboard with visible text: "PIANO BREAK" and what look like note names.

Last week, MCR guitarist Ray Toro also posted photographs that look like they could be glimpses of the band in-studio.

Those who were around during the creation of what became MCR's pre-Danger Days... scrapped album may recall that the band used whiteboards then to sneakily give away potential song titles.