Pictured left is Gerard Way's installation piece for the gallery. Thanks to themaskedman on Tumblr for sharing.

Apparently, the individual landmines (60 in total) are being sold for $100 a piece.

Gerard Way told Alternative Press in a recent interview that the piece he is contributing to the show is an art installation based on Metallica's "One," in the form of a fabricated pile of "quiet"-looking "destroyed, fragmented landmines."

Thank you to Brittany for bringing this to my attention! 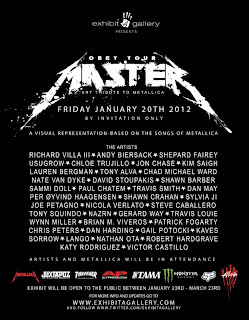 Exhibit A Gallery announced that Gerard Way will be among the nearly 40 artists contributing to their "Obey Your Master: A Visual Tribute to Metallica" exhibit.

Of contributing to the exhibit, Gerard said, “Having been a fan of Metallica for years, their music has always inspired my artistic expression in various mediums.. So, when I was asked to be one of the artists to create an art piece inspired by one of their songs for the upcoming Obey Your Master art show, it was a no brainer.”

The show, which features artistic interpretations of individual Metallica songs, opens January 20 in Los Angeles to the exclusive crowd of contributing artists and Metallica themselves. The show will be open to the public January 23 through March 23.

If you are interested in attending, you can submit an event invitation request.
Artist: Gerard Way Artist: Metallica Artist: My Chemical Romance Exhibit A Gallery visual arts