My last show of the Honda Civic Tour. The finality of that weighed on me as I drove the 5 hours to the Cleveland area. From recent interviews, I had suspected it could be a while before we get to see MCR live again; so, I was armed to savor every moment my favorite band offered me at Blossom Music Center on September 13.

My friend and I arrived at about the same time MCR's bus pulled in, and we were able to hear a few slices of their soundcheck from the outside gates as we waited to go in. While waiting, we met the girl who was doing the tour report for Buzznet, and she snapped a picture of yours truly and other dressed-up MCR fans for the review (far left).

Once inside, my friend and I found our seat. After Matt & Kim, we obnoxiously stood up and started to do stretches, caring very little how crazy we may have looked to those around us.

Fortunately, "those around us" were great company in which to be. Next to us were two girls wearing My Chemical Romance shirts, and in front of us were several others dressed similarly. Hell, even the drunk lady who showed up halfway through their set was excitedly slurring to my friend about how much she loved "that Parade song." Before we had gone in, I had heard a guy grumble, "Man, I'm not liking how many MCR shirts I'm seeing." Too bad for you, sir. But, wonderful for us!

It was as if the crowds from the first HCT stop I attended to this one had been stair-stepping up in their concentration of MCR fans. Noblesville had had more MCR fans than Cincinnati, and Cleveland's number of MCR fans in the crowd seemed much denser than the previous two.

From the second they came out to "Na Na Na..." through the entire set, people were very much into it. Especially during "Teenagers." Before these shows, I had never realized how much of a far-reaching single "Teenagers" was. Every time, it seemed to be the song that got the biggest reaction. Still, "S/C/A/R/E/C/R/O/W," a far less well known song also made an impact.

They thanked a couple friends who were in attendance and sang Happy Birthday to Jason Pettigrew of Alternative Press, adding a unique flair to the show and showing just how appreciative they are of their supporters and friends.

At the previous shows, my friend and I had stood on Ray's side of the stage, and for this one were on Frank's. I realized, as I watched from the new angle, that I and others have been very lucky that Frank's guitar straps have always held up. During "Helena" and the set's other ...Revenge bits especially, Frank stood out, thrashing and spinning with his guitar in a way that could get dangerous if the thin strap holding his instrument to him had happened to break.

The large, wooden pavilion heated up fast with the energy of MCR's set. As I felt sweat starting to drip down my own face, Gerard slipped off his jacket, confirming that it must have been hot in there. Cool-downs during "The Kids From Yesterday," "The Only Hope for Me is You," and--finally--"Cancer" were very much welcome.

It was really the perfect way to end the three-show run I had done on the tour: Surrounded by my fellow fans, covered in sweat, grinning like a fool and gulping for air as cell phones and lighters of thousands lit the Cleveland night.

The hardest part of this is leaving you... 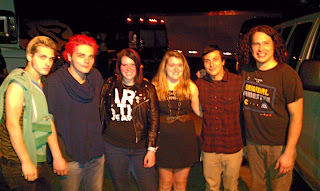 After MCR's set, my friend and I were fortunate enough to be able to talk to the guys briefly and "to...say goodbye, for a little while."

Frank was the first to come out to meet us both with a welcoming hug. "I see the boots are still going strong," he had said in greeting with a grin as he glanced at my shoes. I told him in amazement that he remembered my boots in the first place that they almost didn't survive a previous show I went to and that they may have to go into retirement soon.

I was a little overwhelmed meeting them this time because they all greeted me with a hug, something I have never once experienced from them.

I thought back to my 17-year-old self at a sit-down meet-and-greet. I had blurted, after telling Gerard how much his lyrics had helped me, "C-could I have a hug?" only to be shot down by both him and Big Worm. "You can have a high five, though?" he had then offered. I willingly took that, but I had been mortified by my brashness ever since.

And now, without asking, he--the second to come out after Frank--had opened his poncho-draped arms to hug me when I waved to him. I felt the crimson blush of my inner 17-year-old fade. Sweet redemption!

Ray and Mikey came up next, both following Frank's and Gerard's lead to hug me.

Needless to say, I was a little disoriented from the swirl of Chemical Hug-receiving. A lot of what I had planned to say flew straight from my brain and landed in a mushy puddle somewhere near my boots.

Frank didn't allow anything to become awkward, though, as he stood with my friend and me while the rest of the guys went off to sign a poster a few feet away. We talked about everything ranging from Taco Bell ("I love their Cinnamon Twists. I get into fights with people at Taco Bell. They wont give me them instead of nachos. I've thought about writing to "Mr. Taco Bell..."), "S/C/A/R/E/C/R/O/W" and how he doesn't know how the crowd reacts to it because he can't look up (we reassured him that we love it), "Skylines and Turnstiles" in Detroit, and what the guys may be doing after the tour.

He seemed so bashful as we told them how proud we are of them and he said, "You girls are too much" and hugged us again. It's hard not to compliment them endlessly, though. Especially after one has just seen them play.

Frank had to be pried away to go sign the posters the rest of the guys had just finished with, and the others came back. Gerard talked to me briefly and thanked me for "catalogue-ing" things for them. He had said, "Frank keeps a lot of that stuff, but you really help out, too," which amazed me: that he even knew something I do.

Mikey didn't say much, but he was kind enough to hug us "hello" and "goodbye" and to tell us to "be safe home" before they all hugged us one last time and departed.

The thing that always amazes me about MCR is how thankful they are. They thanked US for coming out to their shows. As if it's a chore. We, of course, thanked them back. Several times.

There's really nothing in the world I'm more thankful for than MCR. They have brought so much to my life and have taught me so many things over the years. They've given me something so powerful to believe in and to pass on. To see them live and to get to talk to them in person is an absolute blessing.

Anonymous said…
It's really amazing the way reading this feels like seeing not only MCR's journey, but yours too - and that's something I think any fan can identify with. This is beautiful.
September 18, 2011 at 5:20 AM