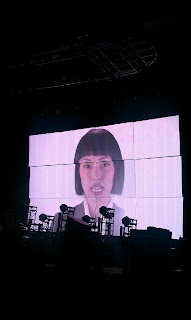 I've learned every dance move my body is capable of from My Chemical Romance.

That was the thought I had on September 10 in Noblesville, Indiana as I found myself strangely dancing (only when not jumping or thrashing) along naturally to MCR. And if you know me at all, you will understand that I do not dance.

However, a lot lead up to that dance revelation...

In my previous Honda Civic Tour review, I had mentioned my GPS's affinity for backroads and strange routes. As it turns out, no matter what settings I program into the thing, it still wants to take me through horrifying, surely-murderer-filled small towns in the middle of nowhere. Other than being guided away from the beaten path, my bad luck from the last show seemed to have scampered elsewhere.

My best friend and I arrived at the Verizon Wireless Music Center one state away from home around 5 p.m., on schedule despite all of our strange detours, to retrieve our tickets.

It's interesting how, after a few shows, one starts to recognize people. It's also funny how those faces change over the years as fans migrate in and out. The set of faces I recognized from the first shows I went to is not the same set I recognize now, aside from the few countenances that have changed only as a result of aging.

While waiting for the lines to go in, I saw Tiffany again, and finally got to properly meet fellow MCRmy moderator Laurie. She, my best friend and her three friends, who had all traveled all the way from the south for the show, sat in a circle and talked MCR until it was time to go in.

Even before getting inside, I knew the Indiana crowd would be better for MCR than the Cincinnati one was. The sheer number of MCR shirts and Killjoy get-ups I saw was very reassuring. All signs had pointed to its being a good birthday show for bassist Mikey Way.

All day leading up to the show, I had been trying to promote a birthday project for Mikey. It would involve the crowd's trying to start a chorus of "Happy Birthday" during the first pause between songs. I was informed just before MCR went on that the first set pause would be after their first two songs.

After their opening with "Na Na Na..." and immediately following showcase of old-school anthem "I'm Not Okay (I Promise)," I and those around me tried to belt out the birthday song at the top of our lungs. Unfortunately, despite our efforts, we were not loud enough for the the project to work.

Still, just a few songs later in the set, Gerard Way began singing the birthday song. Without his even announcing whose birthday it was, the crowd was prepared with a name when "happy birthday, dear Mikey" was upon them.

Check out my video of it below!

As always, My Chemical Romance did an amazing job, and--as I had predicted--the crowd was way more in tune with them than at the previous show I had attended.

The sing-alongs were louder, and the energy exchange was much greater. Only one person near me chanced disrespect for the band during MCR's set, which was a relief after the disheartening behavior so many show-goers in Cincinnati had displayed.

A highlight was seeing MCR play "S/C/A/R/E/C/R/O/W" (Spotify | iTunes) live. It was so touching, and the up-and-down arm movements Gerard directed the crowd to do resonated through the entire amphitheater, creating what was surely a stunning visual from the stage.

"S/C/A/R/E/C/R/O/W" is a song that has come to mean a lot to me and that has helped me cope with many things. I never thought I would get to see it live. I found myself tearing up as I sang along to it in disbelief. 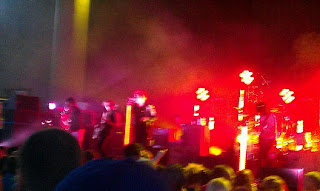 Their setlist, with the inclusion of the aforementioned song and the exclusion of a few previous staples, differed greatly from the Cincinnati one:

As the songs shifted, MCR's digital backdrop changed among the prevailing images of the three albums from which they played: Displaying "the widow" during Danger Days..., the Demolition Lovers for songs from Three Cheers..., and the marching skeleton for those from The Black Parade.

From where I was, it was hard to see their expressions clearly, or to get a good grasp on what was going on onstage, but that made the experience no less touching, especially during "Helena," "The Kids From Yesterday" and "S/C/A/R/E/C/R/O/W," which all made my heart swell.

MCR's replacement drummer Jarrod Alexander fit in seamlessly, and no attention was drawn to him, while it was evident that the four official members of MCR had not let any past misfortunes on the tour hold them back.

As for finding myself moving uncontrollably to their music: Let's just say I went home to find several bruises covering my legs from jumping banging my legs against the seats in front of me. It's almost like one can't help it at shows like this one, where not everyone is as into it.

For me, at least, it makes me want to sing along just that much louder and give them back more energy than maybe I have to offer at all (as evidenced by occasionally losing my breath and feeling dizzy).

After MCR, my friend and I decided to stay for a few of Blink's songs, but after having just seen My Chem, everything else just pales comparison.

When we left, I discovered that my car battery had died while I was inside.
Uh-oh. The bad luck had returned...

Did it follow me to the Cuyahoga Falls/Cleveland show a couple days later? Check back for my upcoming review of that show to find out!

Anonymous said…
Hey, lovely display of words of this show. I live in Indy and loved every bit of the review. I was surrounded by a load of people who didn't move at MCR. I didn't know what it was but I didn't really care much. I was still thrashing and dancing and it's good to hear what you say about us fans from Indiana. I never knew anyone not living from around here would think or even say that about us. I feel honored and am so glad you had a wonderful time. :)
September 18, 2011 at 1:09 PM