Live Review: Taking Back Sunday / July 24 and 29 / Cincinnati and Indianapolis

Some shows just can't be justified in words, which is precisely why I was so hesitant in my trying to capture my experience seeing Taking Back Sunday in Cincinnati on July 24.

Sometimes, as a music journalist (4 classes from a degree, I think I can officially call myself that now), you step back and think, "Fuck! Who the Hell am I:"

When you find Taking Back Sunday vocalist Adam Lazzara suddenly standing on the barricade in front of you, singing your favorite new TBS song quite literally against your face as you fumble for something to do with your hands while there's nowhere to put them but on him. Or, as you watch, over the heads of hundreds, him wading through the crowd all the way to the back with his mic cord held up by the crowd (I assume, for a singer, that has to feel something like being attacked by zombies that don't eat brains, but --rather-- grope you).

When he looks you dead in the eye, grins and sustains the look as you pantomime his lyrics back to him, feeling just as pissed off, or sad, or happy, or excited, or passionate as those words made you feel the first time you heard them.

When you're so covered in sweat and should logically be toppling over from exhaustion, but you continue full-force because it's that. damn. good, and you want to give a band back all the energy it deserves.

When, within one song, the full band and the entirety of the audience is drenched in sweat because you're in the middle of a heatwave and the venue doesn't have air-conditioning, but you're all grinning and you feel like a big, united drippy family.

When the audience sings so loudly that you can barely hear anything else and starts handclaps and chants without any prompting, and even raises a boisterous chorus of "ONE-MORE-SONG, ONE-MORE-SONG" after an opening band (Thursday, who are unbelievable and gush sincerity and hard work from every pore live).

That's when you think: Damn, what are mere words when I have this moment, when I feel this way. What pictures or videos or adjectives or nouns or scratch-and-sniff fucking holograms could even justify this?

That was Taking Back Sunday's set at Bogart's in Cincinnati on July 24, 2011, and it will go down as one of the best shows I've ever seen to date.

When Adam reaches out, as he has been doing at several (if not, possibly all) shows to turn off an audience member's camera saying, "You spend your whole day in front of a screen and you come here and spend it in front of an even smaller screen. I'm right here; just be here with me," I know what he means.

So, as a messenger to consumers, I say: Buy a ticket next time Taking Back Sunday is in your town, and don't hesitate at all. You may have to wait a while; as, their American tour is ending in Chicago in a couple days before they head to the U.K., but if you can travel and somehow get tickets, get there.

Taking Back Sunday fans travel from all over the country to follow TBS. In line in Indiana, five-out-of-seven of us at the front were from out-of-state, and in Cincinnati, the girls right behind my friend and I were from Florida and had traveled up the side of the U.S. following the tour. And it's obvious why.

TBS make every single fan feel something at their shows, and feel it intensely.

One of those big feelings is nostalgia, now that they've returned to their original line-up. New/old bassist Shaun Cooper and new/old guitarist-and-vocalist John Nolan grin their way through the shows, and you can sense how happy they are to be reunited with their old friends drummer Mark O'Connell, guitarist/TBS-founder Eddie Reyes and vocalist/incomparable-showman Adam Lazzara. The set on this tour, though the band did put out a brand new album recently, consists mostly of songs from their debut album, Tell All Your Friends and is a celebration of TBS's twelve years as a band (the stage backdrop boasts an "EST 1999"), and nearly ten years since the release of now scene-legendary TAYF-- an album which audience members, primarily 20-somethings, grew up to. 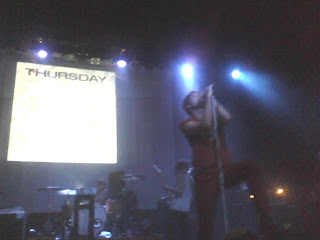 Thursday, as an opener, is the perfect complement to that feeling. Many audience members also grew up with them, and have seen their influence spread over the years. It's hard to think of a word for what Thursday has meant to the music we all so invest ourselves in, but I decided, as I breathlessly yelled to my friend after we watched them play, "They're fucking legends!"

At those couple TBS shows I attended, and especially at the Cincinnati one, I felt that old sense of community rising, and it really is something beautiful.

Over the past week, Taking Back Sunday has given me new friends, amazing memories, vigorous workouts and has raised my bar even farther for what a show should be.

Thank you, Taking Back Sunday. Yes, you did blow my damn mind.

Anonymous said…
"When he looks you dead in the eye, grins and sustains the look as you pantomime his lyrics back to him, feeling just as pissed off, or sad, or happy, or excited, or passionate as those words made you feel the first time you heard them."

This. I've never read someone describe this feeling so perfectly. This is exactly how it feels to be right there in that moment.
July 30, 2011 at 5:13 PM