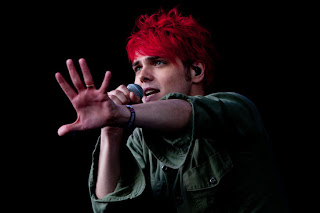 Following My Chemical Romance's performance at T in The Park on July 10, frontman Gerard Way revealed to BBC Radio One that the band is already* working on new material for a future album.

"We've already started writing new music. So, we really wanna do that," Way said when asked if following the Reading and Leeds, they were going to take a break or record a new album.

In addition to planning ahead for a new record, Way discussed touring hopes to follow the Honda Civic Tour.

"There's some countries we're talking about going to because we haven't gotten to them yet. We haven't been to South America, Southeast Asia, Mexico, so we're still talking," Way said.

**Recently, in an interview for the T In The Park Festival programme, guitarist Frank Iero expressed interest in recording, as well.

"It'd be fun to go back into the studio," Iero said when asked what MCR's post-festival-season plans are. "We have been feeling very creative lately, I think we could make another record if time was on our side."**

You can download the Radio 1 interview from MCR Updates on Tumblr.

*Yesterday, that sent fans into an uproarious frenzy. Note that many My Chemical Romance songs predate albums by several years.

mcrmom said…
I love them so much and can't wait to see them next month. They amaze me with their energy and creativity. I just hope they don't get too burnt out this trip and get to enjoy themselves.
July 12, 2011 at 3:01 PM