I originally heard Taking Back Sunday's rendition of Kanye's "Can't Tell me Nothing" through a Warner Brothers Records Summer Sessions stream.

Luckily, it wasn't a one-time-only thing (they had commented that it was something they were doing for kicks and were surprised at themselves for playing it live then), and AltPress did a story on their covering it at a recent acoustic in-store so that I could find it and share it with you all. 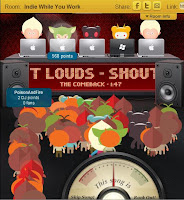 The website is set up with various rooms through which users can stream music for one another as "DJs" or simply listen as audience members.

It's great way to interact with others while sharing music LEGALLY!

So, join, because I want to play music with people!

"Ok according to Kreayshawn's bio she's an artist, producer, film director, musician and blah-fuckin-blah...so basically she just owns a Mac. i feel bad. im sure she probably puts her heart into it & thinks she's helping the world or some shit, but seriously gimme a fucking break.

morbid curiosity spiked, and I had to look her up. What resulted was a listen to "Gucci Gucci" (after stumbling upon far inferior "Bumpin Bumpin"). Actually, I should say, multiple listens. on repeat. all day.

There something a little too addicting about Oakland's Kreayshawn's humorous rhymes and that "One big room, fulla bad bitches" bit.

This song is bad-ass, the video is bad-ass, and MCR fans will be pleased to see not only MCR's touring keyboardist in action, but also Frank Iero dressed up as Frankenstein in it.

Fun Fact: Frank has said he would have liked to have done make-up for horror films if he weren't in a band.

In continuation of the horror theme...

mcrmom said…
Have you ever seen the video for Congratulations Smack and Katie? Hilarious. But the sight of Frank as Frankenstein is too much to resist.
July 7, 2011 at 4:21 PM