On July 9, My Chemical Romance appeared at London's Roundhouse as a part of the 31-day-spanning iTunes Festival.

The performance streamed in full through iTunes and is still available to watch there, but -- luckily for us -- MCR fans are pros at streamripping by now, so you can watch it through the hour-and-a-half video embedded above.

I know almost two hours sounds like an intimidating amount of time to dedicate to watching a concert online, but My Chem's iTunes Fest performance is one of the best I have seen from them in years.

Vocalist Gerard Way, toward the middle of their set, had proclaimed it a magical night. And it truly was. 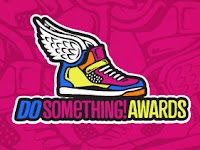 2. VH1's Do Something Awards

VH1 and DoSomething.Org are honoring artists and other personalities who have donated their time and resources to helping others in the 2011 Do Something Awards


MCR fans: "#SINGItForJapan" is nominated in the Charity Song category. Be sure to vote! Alkaline Trio's Damnesia came out earlier this week. There I am, to the left, showing my copy off proudly!

Despite several underwhelming reviews, I know it's a piece every Trio fan will want to have in his or her collection.

Keep an eye open for my review, which is coming soon!

4. Against Me!'s "Because of the Shame" music video"

Continuing the Alkaline Trio thread... How many 'Trio shirts can you spot in Against Me!'s new hyper-Floridian video for "Because of the Shame" between shots of night driving?

The highly personal track comes from AM!'s 2010 release White Crosses, which is set for re-issue July 26. The re-issue will include the original album, along with bonus tracks and Black Crosses with an additional 14 songs, which are alternate versions of or unreleased songs from the original album.

Check out the video above and more from bonedo to learn how to play MCR songs on guitar...from MCR's guitarists!