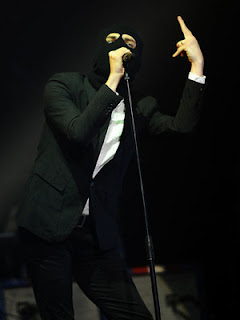 My Chemical Romance, who were nominated for 5 Shockwaves NME Awards, picked up two of them tonight and surprised the crowd with a masked performance.

When accepting the band's award for Best Video for "Na Na Na...," which they won along with Best International Band, NME reports that vocalist Gerard Way said:


"We want to thank every fan that voted for us. Don't ever let the media tell you what your body is supposed to look like, you're beautiful just the way you are. Keep it ugly."

Fans who are familiar with NME's November 2010 issue will recall that the band were none-too-pleased when they read that the writer had described guitarist Ray Toro as having "doughy lovehandles" in a feature article about the band.

MCR opened NME's award ceremony with performances for which they were all dressed in the same attire and wearing ski masks. Fans speculate, though it is unconfirmed, that the masks may have been a direct middle finger (which is also the form of the NME award, ironically) at NME to detract from the focus on the way the band looks and to bring focus back to the music itself.

When asked about the masks by an NME reporter, guitarist Frank Iero said, "It's about the music, not the messengers, you know?"

Laifai said…
YAY! Thank you for the post! I have been looking for the video of there performance everywhere. Thank you again and I really enjoy your blog! keep it up :)
February 24, 2011 at 12:11 AM

There is also one of "Vampire Money," but the video's titled Vampires Money and I couldn't bear to embed it because of that. Haha!