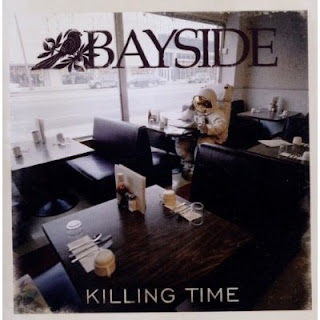 
Four tracks into Killing Time, I knew Bayside's latest effort would be my favorite of their albums. Past releases have featured strong tracks as singles that were the few I kept around as iTunes library-worthy while I found the albums as whole works to grow monotonous by the end. However, Killing Time is an album from which I could see myself hanging onto more than a few tracks permanently. It doesn't hurt that it is a mere 10 tracks long and is able to hold interest through all.

Bayside, while staying true to the sound of the early 2000s music era from which they emerged, return with a renewed energy. Killing Time recaptures the sometimes harder-driven sound of 2007's The Walking Wounded and ditches the structural predictability of 2008's Alkaline Trio-tinged Shudder Many bands from their time to get stuck in a rut, redoing angsty Album X over and over. The mark of true artistry is to stay true to what a band is, but to grow. Bayside has definitely grown.

High points of the album include: the anthemic, sing-along track "It's not a Bad Little War" in which vocalist Anthony Raneri sings at lighter-raising, empowering levels: "We are / our only chance in the world / If fate should fail us, then hope will see us through… So, stand for something/ ‘cause something’s overdue;" "Killing Time," the album's dark-sounding closer with a "get off your ass and do something" message; and the highly-catchy, sway-inducting "Mona Lisa."

At times, Bayside's Killing Time finds a sound reminiscent of Motion City Soundtrack sans keyboards in its vocal melodies and of Green Day in it's background shouts, rhythms and guitar (see: "Seeing Sound").

Bayside overcomes the early-2000s-Victory stigma that clings to so many bands and comes out triumphant. Killing Time often provides the pop-punk sound to which is traditionally attached much more shallow lyrics than those delivered by Bayside vocalist Anthony Raneri. It’s music that has grown up with its listeners. That 12-year-old girl in neon at Warped Tour may make her “Ew. Who is that?” remarks about Bayside, but she and her breed wouldn’t stand a chance in a pit filled with their veteran fans, fortunately.
Album Review Artist: Bayside CD Reviews