A Goodbye from a Member of the MCR Team and an Introduction!

February 24, 2011
Fans who frequent My Chemical Romance's website or who were members of the band's MCRmy Street Team are probably familiar with Mikael, or - as he was known to street teamers - the mysterious "TSN Ninja."

Today, Mikael announced that after his 4 years working at WBR with My Chem, he will be moving on. 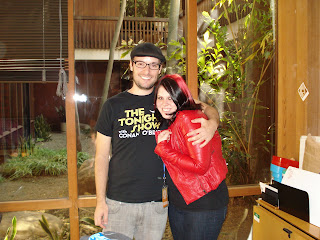 There is a tremendous amount he did for MCR and for the fans for which he can never be thanked enough, and he will certainly be missed. I think Brandi from MyChemicalFreak who met Mikael with me in November said it very well: "For those of you who didn’t know him, well you missed out. He cared more about the fans than anyone ever could have."

I feel very fortunate to have met someone so hard-working, passionate and inventive, and we - as a fanbase - were very lucky to have had someone who cares about us and My Chemical Romance as much as Mikael.

But No worries, Killjoys!

Mikael assures fans that we will be in good hands (and I fully trust him). Tina, who Mikael describes as "absolutely amazing, and...a true killjoy at heart," will be taking over running the MCR site and various accounts! If you need any help out there in the Zones, do not hesitate to contact her!