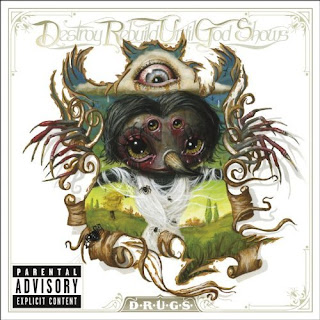 To start the picking-apart of D.R.U.G.S., the debut album from Destroy Rebuild Until God Shows (also D.R.U.G.S.), it is appropriate to introduce the parts that make up the whole of this much-needed savior-monster of a supergroup: Craig Owens, vocalist formerly of Chiodos; Matt Good, guitarist and vocalist from From First To Last; drummer Aaron Stern from Matchbook Romance; bassist Adam Russell from Story Of The Year; and guitarist and vocalist Nick Martin of hardcore band Underminded. Take that pill, let yourself in 2005 swallow it and let's resume...

As it turns out, that combination is just as awesome as it sounds to your 2005-self, upgraded to 2011. Capturing an energy ball of raw, gorgeous, filthily jumbled emotion and a sense of intriguing darkness, D.R.U.G.S. sounds like rolling with a guitar in the mud of a graveyard in the best way possible. The overall sound and feeling is most comparable to that of The Used's aggressive 2007 release Lies For The Liars. D.R.U.G.S. is able to pick up on the soaring intensity of bands like 30 Seconds To Mars with emotion-injected melodies (see the chorus of "Graveyard Dancing"); the darkness and ear-assaulting violence of From First To Last ("Mr. Owl Ate My Metal Worm") and even a more playful and inspiring feeling reminiscent of Taking Back Sunday ("I'm Here To Take The Sky").

Basically, it's many things that are rad wrapped into one perfectly-executed album.

Unfortunately, the musical complexity and the waves of epic sound aren't backed by the deepest lyrics. Take, for instance, "Sex Life," a well-meaning, stay-out-of-my-personal-life and worry-about-the-music taunt that plays too much into fickle drama than is comfortable to listen to with a straight face. The song even had a fake sex tape leak as a teaser. Still, it's a great listen and I can even put aside my annoyance with acknowledging and feeding drama to appreciate it.

Of course, I have to nitpick the tiniest lyrical fallacies only because the album as a whole is so amazingly solid. Long after this review, I will keep it on repeat, which is not something I can often say about releases from new bands. Trust me. I came in a D.R.U.G.S. skeptic, and D.R.U.G.S., with almost hilarious ease, has converted me.