A short story about "This Could Be Love" before I praise this particular version of it.

The first times I saw Alkaline Trio live were when they opened on My Chemical Romance's 2005 headlining tour with Reggie & The Full Effect. At that time, they were not yet my second favorite band, but seeing them live then sealed it, and this song in particular hooked me.

At the shows, though I didn't know many of the words to their other songs, I knew I could sing along when they commanded the audience to at "This could be love/ Love for fire."

After seeing them twice on that tour, I went out and bought Good Mourning and was fully equipped to sing along when I saw them a third time. The crowd was dead that particular night, and Matt Skiba pointed me out because I was so into it, and dedicated a song to me. Amazing!

Story aside: Holy SHIT! This version sounds beautiful! Damnesia comes out July 12, and I am infinitely excited! 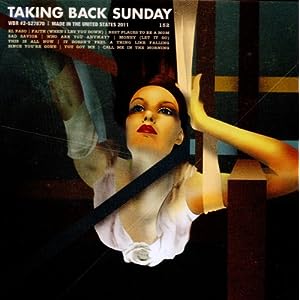 Taking Back Sunday's self-titled album came out yesterday, and I have been listening to it non-stop and think you should, too.

I'm working on getting my thoughts on it down fully and will complete my full review of the album later today, so stay tuned!

Recommended tracks:
"This Is All Now"
"Best Places To Be A Mom"
"Money (Let It Go)"

Since I've been home for the summer, I've seen Belle Histoire live a couple times at small shows. I can say without a doubt that they're one of the best-sounding local bands I've seen perform in a while.

4. The Ghost of Asa Phelps

Continuing on the local shows note. The Ghost of Asa Phelps, though they have now moved on, were my favorite band to see in my college town of Athens, Ohio. It was love at first-- time they soundchecked using an Alkaline Trio song then covered The Misfits.

None of the Athens scene has made me feel quite as at-home as those dudes did.

5. "Thank You for the Venom" (live @ Hurricane Festival) - My Chemical Romance

Fast forward to 1:33, where Gerard Way and James Dewees unleash the hounds of Hell from their vocal chords.