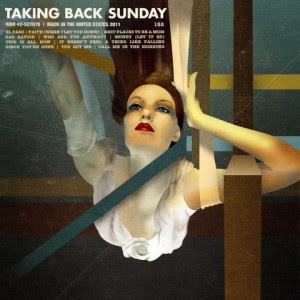 
Last March, Taking Back Sunday’s line-up took the least expected turn. Matt Rubano, their bassist of seven years, and Matt Fazzi, their guitarist for the short New Again era, were suddenly out. I doubt a single fan expected then that those members would be replaced by Shaun Cooper and John Nolan, the bassist and guitarist/vocalist respectively, from TBS’s Victory Records debut Tell All Your Friends.

It wasn’t an early April Fool’s joke as many fans had assumed. The old TBS was back with the message: “Sometimes it takes some time to remember where you were headed in the first place and the people you intended to go there with. There’s no hard feelings, just the future.”

Since then, the expectations have been all over the place and curiosity high for TBS’s latest release, Taking Back Sunday.

First of all-- Tell All Your Friends Part Duex, the new self-titled album is not. However, fans who wanted to hear more from the old times can indulge in the iTunes deluxe version of the album, whereupon TAYF tracks “Great Romances of the 20th Century” and “Ghost Man On Third” have received the 2011 TBS acoustic treatment.

That is not to say that those who, when they heard the Tell All Your Friends line-up had returned, thought the band would revert to “Old TBS” will be disappointed. Songs like “Best Places to be a Mom,” “Who Are You Anyway?” and “This Is All Now” capture that essence.

That’s also not to say that Taking Back Sunday have done any old-sound-recycling for their latest release. None of the tracks sound like their forefathers. This is, indeed, a new Taking Back Sunday (not a New AGAIN TBS, mind you).

The most distinct difference in sound appears where Taking Back Sunday swoops to a slower sound (“Sad Savior,” “Call Me In The Morning”) and does it in an almost folksy way. That may be a result of vocalist Adam Lazzara’s gritted-teeth and drawling singing style—one that makes him sound almost pained until he opens up his sound on the large choruses interspersed between calmer verses.

That signature voice is accompanied by John Nolan’s (also of Straylight Run) ground-up, shrill cries. As ear-abusive as that combination may seem, the voices combined somehow work, though differently than they did in 2002. A listener can tell that they have since honed distinct vocal styles.

Though, do not expect the same dueling dual-voice style that color and define the sound of TBS’s first three studio albums—at least not to the same degree; It does make brief appearances. Sadly, fans may have to accept that harmonies have replaced that heavy battling vocal style.

The album’s being self-titled makes sense; as, Taking Back Sunday sounds like a conglomerate of where the band has been, while it also hints briefly at where it intends to go.

It's a sound different from past TBS material, but still very much the band's own.