A press release from GOOM Radio:

MCR Mondays (My Chemical Romance)!! Every Monday on FOE let us know your favorite MCR tracks, cause were going to play EVERYTHING!
Leave a comment on Facebook (Friends Or Enemie Radio), Tweet us @FOERadio what song you would LIKE to hear!

I just heard the following from DJ Schwenker, who will be hosting the radio show:

"Changed my mind! We're calling it "MyChemMondays". MCR all day, at least one song an hour, from all their albums, not just hits."

There is now a page up for My Chemical Romance Radio Show. Every Monday 3-6 p.m. EST! 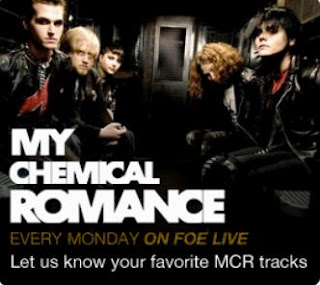 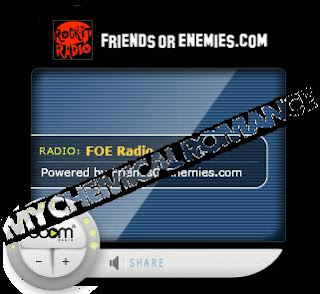 When the MCRmy was called to arms to bring 50 viewers to the Friends or Enemies live Ustream channel in order to get an MCR song ("Thank you for the Venom") played on the online radio stream, "soldiers" rose to the occasion valiantly, but it did not stop there.

In the middle of the song, the DJ held up a sign that said "MCR Mondays?" to those in the video chatroom.

After that, MCR fans were told to bring 100 viewers to the stream for yet another MCR play, which was accomplished within the length of a few songs.

Because we met our goals, FOE said that "MCR Monday," which was kept secret from those who weren't in the video chat, would happen.

What it entails, I do not yet know, but they say they may have me announce it via #MCRchat on Friday; so, keep your eyes open!

Anonymous said…
hells to the yeah! Best FOE radio day EVER!
Still can't believe I got this shit started.
MCRmy will rule forever. Love you for helping me out and the entire army for having me back...