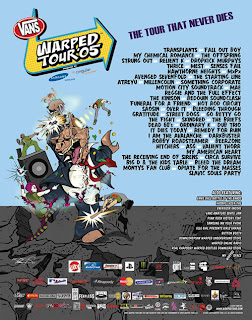 I ran into a problem with this week's review. I wrote about this show, but the problem is I wrote about it on Greatestjournal.com, which is now shut down and users cannot retrieve blog entries that were once posted there.

I dug into the deep corners of the internet to find another of my old blogs, where I posted only sparse notes on this show.

I believe, however, that I may have written about this show in a diary I left in my dorm room. When I get back from Holiday break, I will add more details from my diary.

I'm back from North Carolina! I've learned a few things on my trip...

makes me very greedy about my spot when I have barricade. I learned a new hip movement to keep my spot. I didn't want to lose it and get killed like I had in Columbus

Can hold my pee for over 10 hours for MCR

When my friend and I were let into the venue in North Carolina, I didn't waste any time and went immediately to the main-stage to claim my spot for MCR. A glimpse at the schedule told me, however, that it would be a VERY long day. MY CHEMICAL ROMANCE WAS THE LAST BAND TO PLAY!!

I got to see all the bands I missed from having to leave early from the Columbus warped tour, so it was okay, but I was just ready for MCR!

I managed to hold my spot (and bladder) all day as it rained on and off and people got increasingly more smelly and I watched person after person make their way to the front and beside me. Luckily, none of them were able to wrench me from my spot! MWUAHAHA! I was NOT about to let go of that barricade no matter what it took!

By the time MCR came on, it was getting dark and starting to rain harder than it had all day... fitting. It was perfect. They played the same songs they had in Columbus, I think, and I went crazy! I was seeing them as close as I possibly could and it was overwhelming and amazing!! After all the waiting all day, it was relieving and surreal to finally see them.

I think they may have cut their set short because of the rain, which sucked, but it was still amazing.