Adventures in Journalism: 'Metal Hammer' and the My Chem Misquote Mishap 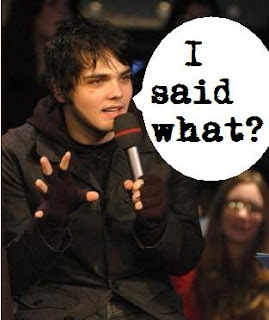 Last quarter, when I found that my news writing class would feature a lecture titled "The Science of Linking," I scoffed and rolled my eyes, having been down with the old a-href since the days of GreatestJournal. Who seriously wouldn't know how to link, and why the hell would someone not link?

Well, apparently some news websites didn't get the memo.

Earlier this week, I stumbled across an article from MetalUnderground[dot]Com, wherein the writer made the accusation that Gerard Way, lead singer of My Chemical Romance, had questioned Judas Priest's claim to metal. Briefly mentioning the source of the quote without linking, the writer posted this as Way's original quote:

"Judas Priest is considered metal, but it’s great rock n roll. (New MCR songs have) nothing to do with that era of metal, the hair rock, but then having everything to do with like the birth of power-anthem metal."

Not only does this quote, with the misinterpreted replaced section, not make grammatical sense, but it also comes across as insulting as if Way is insinuating that Judas Priest are not really metal while My Chemical Romance are.

The thing is, this is not what Way originally said. This quote is from an article from Spinner posted last week.

The original quote, Way's response to a comment that the new MCR song "Death Before Disco" was reminiscent of Judas Priest's "Living After Midnight," was the following:

"That's my favorite Priest song," Way says, admitting there is some '80s flavor on the disc. He credits 'Trans-Am' for freeing those influences up.

"That song actually reminded me in an odd way of all the best stuff of '80s what is called cock rock, but not all of it was," Way says. "Judas Priest is considered metal, but it's great rock 'n' roll. It's having nothing to do with that era of metal, the hair rock, but then having everything to do with like the birth of power-anthem metal. After 'Trans Am,' that started to really bleed into the record."

Way is actually complimenting Judas Priest on their freeing themselves from the fitting-the-mold metal of the '80s. The "it's" that the writer decided could be replaced by "New MCR songs" made all the difference in the world.

But, this is not the only failure in this story. After I left persistent and respectful comments, the writer edited the story and revealed that the source of the information he used was Metal Hammer. By not linking to the original source, the writer of the article set himself up for criticism, but it was not all his fault. Metal Hammer too had failed to link.

So, in the end: Metal Hammer was the original culprit. As a magazine, it should know better than to not link to the interview from which it derived the ignorantly edited quote but, -- alas -- it did not link and left Priest fans without all the information and with tempers high.

I wonder how much farther this misinformation has spread?

PS: At the time I post this, my comment on the Metal Hammer article with the actual quote and information 'is awaiting moderation.' Hm.

haley_helena said…
I avoid MetalHammer because EVERYTIME anything about MCR is posted, all people do is say 'these emo faggots aren't metal,blahblahblah' and I justget all worked up:/
December 28, 2009 at 8:03 PM

Yea, all the metal websites seem to be doing that. Funny, considering the guy from Priest is actually gay.