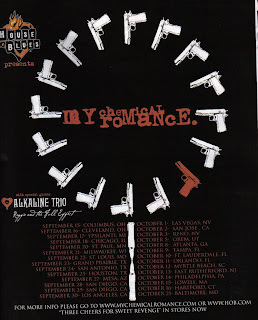 Part Five of my Classic Reviews series. Originally posted on GreatestJournal.Com in 2005

Yes, that's right. Miss Cassie here played hooky. My friend and I left for the venue, got there at about 11:30, watched MCR do their soundcheck through a hole in a fence (it was an outdoor venue), then went to wait in line for... forever. Ha, but it is well worth it. My Chem is worth everything *clutches heart and smiles softly*.

While we were waiting in line, we met some super cool people, all of which had dramatically different personalities, which made for an "adventurous" line wait. That morning, "Big Worm" came out and talked to all of us in line for a while, left, then returned with drumsticks from Bob. Mine is dinged up; so, I know he used it!

When the doors finally opened, despite our lining up super early, my friend and I still got second-fucking-row. Gah, I hate second row! It's hell. Oh well...

I honestly wouldn't have cared about being in second row that much had the people in front of me not showed up at 5 P.M. and said "OH MY GOD, GERARD IS [insert "HAWT" and its various synonyms here]" over a thousand times before Reggie and The Full Effect even came on. The girl next to me and I had a fun time trying to scare them to death with "front row horror stories." I think we succeeded, judging by the way their eyes widened and the way they kept asking questions:

Before Reggie and The Full Effect came on, James (Dewees.. singer/keyboardist) was standing at the side of the stage; so, I waved at him. He waved back and I grinned really big; then, he lifted his shirt and rubbed his nipple at me.. funny stuff LOL.

Reggie was surprisingly good. I've never really been big on them until I saw them live and heard more from them. They're...them. and that's all.

They covered "Raining Blood" by Slayer and James jumped offstage, popped up in my face, then dove into the crowd (landing on MY head), making me all giggly and whatnot.

The crowd was insane during Reggie, which I didn't really expect, but they were, and -- by the end of Reggie's set -- I was drenched (not exaggerating) in bodily fluids (most of which didn't belong to me) and was thoroughly dehydrated. I thank God for kind security guards. Yunno, the ones who give you a shitload of water at shows. They saved my life.

Next came Alkaline Trio *grin*. I had the most hardcore Alkaline Trio fans behind me, and it was insane. They were all over the damn place, and I actually think they left after Alkaline Trio. Matt Skiba was all over them too, pointing and grinning and getting all excited at them. The Trio was awesome. I didn't know all the songs they played, but I LOVED their performance.

Somewhere in the middle of "This Could Be Love," which they dedicated to MCR, I found myself getting light-headed. That's what I get for not eating anything but fucking Doritos and a sausage biscuit all damn day. Not to mention the thirst... God, I needed water... Security took care of that while waiting for MCR to come on, though ('cept the bastards changed to raspberry-flavored water. Ick!). 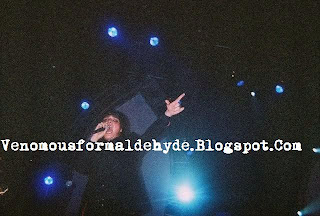 Before long, it was MCR time.
Golly, I got so excited. I knew it was going to be one hell of a show and that MCR would be at their peak energy level since it was the first date of the tour. Perfection! Every second of the show was perfect. From Gerard's repeating the word "fuck" over and over in the dark randomly, their playing "This Is The Best Day Ever" for the first time in three years, to "Shut Up and Play" (their new song), and to... my nearly collapsing because of heat exhaustion?

That's right. Not eating all day and being in second row caught up to me... That and the fucker beside me who had his elbow lodged into my ribcage so that my arm was stuck awkwardly over his shoulder, the stinky people behind me and the brats in front of me who didn't know a majority of MCR's songs' thoroughly pissing me off.

Yup, it all caught up to me in a wave of bile from deep within my stomach that almost (ha, fooled you) projected all over the backs of the people in front of me. Somewhere in the middle of whatever song MCR played before "...Prison," I found myself reaching out desperately for a security guard, who, when I touched him, gave me a look as if I were the lowliest piece of filth on his bright yellow shirt and walked away. That is where it all got blurry, kinda dark and... nice and cozy between the warm bodies in the crowd... mmm... sleepy time for Cassie. NO! I decided then that I had to get out of the crowd, I didn't want to pass out in it, for sure; so, I turned around and -- with all of my strength, which wasn't much -- I pushed a shitload of people aside and ended up on the outskirts of a lovely circle pit. Yea, gotta love my luck there... Thank goodness it was Gerard's "story time" before "...Prison" and all was calm. I pushed through people to the side of the pit (got a few "Holy shit"s and "Oh my fucking God, dude"s) as I staggered to the back of the crowd, nearly falling a countless number of times, until the mass of people started to thin out.

It's definitely a whole different, calm world at the back of the crowd. I kept up my staggering until I found a low concrete wall. Oh, how cold that wall was and perfect height so that when I fell to my knees my head rested perfectly upon it. I rested there all during the intro to "...Prison" then got up and destroyed a few faces. I wore myself out then collapsed on the wall again as MCR went offstage.

I knew there would be an encore; so, I didn't leave. Not long after they went offstage, the boys were back and my ears were greeted with the opening drums of "Vampires Will Never Hurt You," my favorite MCR song! I sprung up from the wall and ran forward into the crowd, yelling "Holy fucking shit" so loudly that I could hear myself over everything. I found a nice clear area where I jumped and screamed and lost my fucking mind. Not smart in my condition, but it felt so good. After that, they did "I'm Not Okay," and I spent the whole of it breathing heavily, face buried in my little concrete pillow, only moving to raise my arm for the classic Not Okay "middle-finger-salute."

And just like that... It was over and my world's realities came slowly back.

A creepy-looking guy walked up to me and was like, "Dude, why are you kissing wall?" I glared at him and flipped him off then stood up (shakily) and staggered in the general direction of an exit with the rest of the crowd. I found my friend, an angel holding a cup of ice water, bought merch and got the Hell out of there, completely exhausted, staggering, smelly and grinning like a fucking fool.