The Summer of Bands' Discontent 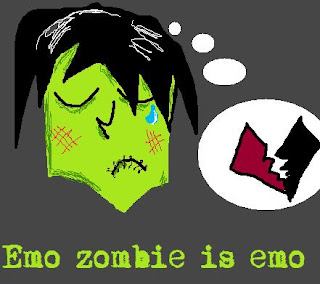 I am so sorry to have posted so little during my summer break. This whole “living with dial-up” problem is getting pretty brutal.

But, let us forget about the slowness of my blog as-of-late, we have some serious issues to discuss.

An epidemic of sorts seems to be spreading through the land of bands lately: it’s the strange virus of members’ quitting and dismissals. Bands including Against Me!, Senses Fail, and the Matches have fallen victim to this virus, and all during these spring and summer months! Is it the summer heat messing with their heads?

Here are a few cases of this rapidly-spreading disease:

Chiodos announced in mid-May that they were parting ways with their drummer, Derrick Frost. The band are currently on Warped Tour with a replacement drummer.

Chiodos’ fellow 2009 Warped Tourmates, Senses Fail, announced that after Warped tour their guitarist, Heath would be leaving the band.

Two bands that I had recently seen live have replaced a part of their live show that I witnessed: Both Envy on the Coast and Against Me! have dismissed their drummers.
It came as quite a shock when I read on Against Me! singer Tom Gabel's blog that "Warren's heart [hadn't] been in [it] for a while now," especially after seeing the drummer's grinning face as he played live.
As for Envy, if you go to their myspace, you will find a series of blogs introducing their "new drummer," though fans don't seem to know if the band is joking or not with their introductions.

The most drastic changes have been made with The Matches who have decided to call it quits altogether. Whether this is permanent or a mere hiatus, it has yet to be seen. For now, we know only that they are looking to pursue other projects and that “The Matches has become something [they] prefer to look back upon proudly,” according to a blog posted last week.

The Matches will be performing two special “going-away” shows in California on August 22nd and 23rd at the Troubadour and the Fillmore respectively.

Most widely buzzed-about in the land of band members’ changing has been Panic! At the Disco (yes, the “!” is back). After members Ryan Ross and Jon Walker left the band, fans have been wondering about Panic!’s future. To reassure the worried fans, the band posted a new demo within days of announcing the two members’ departure for “a musical excursion of their own”. The band also reassures fans that all album and tour plans are still on!

Change can be hard, but a band wouldn’t change its line-up without considering the future and the bands’ well-being as whole. Just look back fondly on the memories you have of past members and move on with the bands you love. Sometimes things don’t work or a different opportunity appears, and things like that can’t exactly be ignored or prevented.

Just had to say, Have Heart - a hardcore band from Boston - are currently on their last tour. So they are also leaving the music world soon.