Strutting onstage in character at the beginning of The Black Parade is Dead!, The Black Parade started the Mexico City show saga, and later My Chemical Romance ended it with the characters left behind and band-mates walking, with exhaustion, to a backstage retreat at the end of ¡VENGANZA!. A celebration of the death of an alter-ego and a dual theatrical event, this show is certainly worthy of its two-part show release. The first part of the 2007 show, The Black Parade is Dead!, is the segment of the show where My Chemical Romance, for the last time, perform as their alter-egos, The Black Parade. The newest release and second half of the performance by MCR sans the TBP is scheduled for "street-release" tomorrow, and I was fortunate to have obtained my copy early. 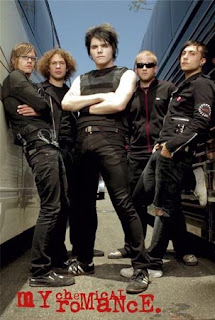 Where to start? Well, first of all-- ¡VENGANZA! is an awesome package, The performance itself comes in the form of a bullet-shaped USB device. For the ghosts of us MCR fans from the past, the package pays homage to an earlier time of the band's history by supplying a replica bullet-proof vest of the one in which Gerard Way is pictured to the left (not from Venganza!). This is a symbol that has come to epitomize what fans refer to fondly as "The Revenge Era." With gun embellishments and "REVENGE" boldly across the back, the vest is a remarkable collector's item for any fan who loves all things Three Cheers.

Beyond the material and to the good stuff. The performance itself is great, though less energetic and without the theatrical flair of The Black Parade's performance. One must keep in mind, however, that the band performed TWO sets that night, first as their energetic alter-egos, then without all the fancy ornamentation and stripped-down to themselves as they are shown in ¡VENGANZA!. What can be said of the performance is that it is - as it always is with My Chem- heartfelt and 100% honest. Fans are treated to an emotional, genuine performance, and to a rare experience. The band plays both "The Jetset Life is Gonna Kill You" and "It's not a Fashion Statement, It's a [Fucking] Deathwish," which have been rarely played lately. They are a couple of the songs that one sees the band play live and later exclaims to everyone who will listen: "OH MY BOB, THEY PLAYED JETSET / DEATHWISH" Kind of a big deal...
As for the emotion factor, it's definitely there. I found myself nearly crying three times while watching the performance, but that's just me and my current predicament. Point is, this band's live performances are a moving experience that ¡VENGANZA! attempts to capture and does very well at some points. Nothing, however, is like seeing and feeling the real thing.

As for the format of the "data," ie this fancy-pants USB situation-- it's definitely a new experience, and the first I have had of this kind with My Chem. The video quality is great, but I would still prefer a DVD. Call me old school, but watching something on a television seems a bit more special than watching it on a computer. Still, the format is unique and, because it is on a data device, ¡VENGANZA! offers more than a DVD; such as, exclusive interactive photos and a PDF of what would be "album art."

So, do I recommend this? Oh, yes. Click here to order your own!

Me said…
Awesome review! I wish I was that good at writing stuff.