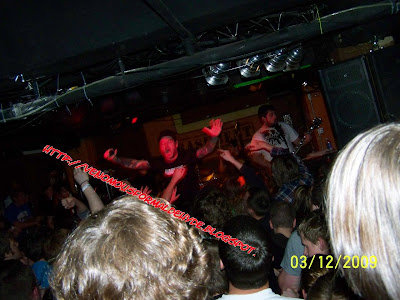 Long-overdue is the perfect adjective for this review; I would say. I apologize for the extreme lateness, but here it is, as I promised.

The day of March 12th was filled with much anticipation as I struggled through my Philosophy and Visual Communication classes, watching the clock for the moment I would be released and could be on my way to Columbus. This wasn't a show for which I needed to line up 20+ hours ahead of time, so it wasn't at all stressful when my friend and I arrived at The Basement and the entire line had already made its way into the small, crowded venue.

The Basement itself isn't a place where one necessarily needs to wait a ridiculously long time in line to procure a decent spot in the crowd (to obtain tickets that have yet to be distributed; however, you BETTER be there early). See, my goal when waiting in line for a ridiculous amount of time is "barricade, barricade, barricade," but The Basement has no barricade, so what's the point? Ha! That was a joke. Being pressed directly to the stage is far superior to being pressed to a barricade five feet from the stage... Back to my point, this venue is TINY and the shows intimate no matter where you find yourself positioned in or around the mini-mosh-pit. The only problem with the venue is that one may have a hard time finding where the stage is exactly upon first entering the underground [literally] place.

So, after finding a decent spot just behind the lower-level of the pit, I situated myself and observed. The crowd for the night was comprised mostly of males, which was a definite swing from the usual crowd composition for the shows I attend. There are reasons for this, of course. SF have done well drawing in the dudes with lyrics manly enough to be, at times, described as "brutal" and are still emotional and sincere in what is being said. Not to mention, there is screaming. Boys like screaming. Boys who like screaming are cute...

Anyway, the show begins with

It took something only slightly less than a threat to make the audience move to this band. They were entertaining enough and impressive for a smaller, local band, but I found upon beginning to write this review that I had forgotten most of their performance. For most of their set, it was difficult to hear the vocals. I don't blame the band for this; The Basement isn't exactly acoustics heaven.

But what did they SOUND like?: At times, the band sounded like an attempt at mixing Circa Survive and screamo with some Thrice-like elements.

By far the more entertaining of the two bands, The HiFi Horizon kept the audience entertained and in motion with their kinetic stage presence. The sound was better when they played and the atmosphere more enjoyable. Somewhere in the middle of their set was the point when the crowd really started moving, and the air was permeated with the thick, moist vapors of sweaty boys moshing. Brutal. However, their use of multiple lyrical cliches made me smirk through most of their set.

But what did they SOUND like?: Chiodos. A blatant, shameless Chiodos reincarnation. Running onto the stage and starting the set with immediate rushing guitars, manically pounding drums, and screaming vocals, Senses Fail started their set off right and continued to impress the rest of the way through. The crowd was wild, at least in the pit, and the band mirrored and shot the energy straight back, and even when there wasn't so much excitement, the band encouraged it.

I noticed a funny phenomenon that occurred throughout their set. When the band would play a song from Let it Enfold You, the crowd lost its collective mind, but the newer songs-- ehh, not so much. Some I found mouthing the words but incorrectly or simply staring blankly at the stage. Their most recent release Life is Not a Waiting Room came out at the end of last summer, so why was it not a source of excitement for the audience? Well, that's a question that remains to be seen at another time.

Even if the crowd appreciated some songs more than others, the band still offered a generous mix from each CD excluding their debut EP, From the Depths of Dreams from which they played two songs, one of which being "One Eight Seven" as an encore.

Vocalist "Buddy" Nielsen provided the audience with hilarious between-song banter that ranged from his playfully bashing a band with whom they were on the Saints and Sinners tour to hitting us with some nostalgia of "old" Nickelodeon. Videos of some of this will be posted later.

When one attends a Senses Fail show, one is certain to be bombarded with adrenaline, humor, and sheer entertainment. Do I recommend you see them live? Oooh, yes!