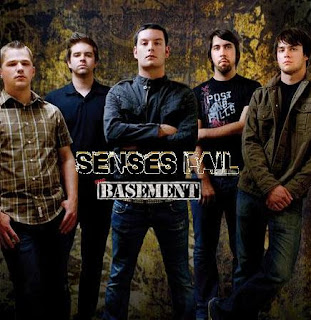 Have I really, honestly, since I got my tickets months ago, not mentioned this show?! Well, I'd say there's no time like the present, especially since the show is now mere days away.

On Thursday, March 12th, yours truly will be found in Columbus, Ohio at a little venue called The Basement to see Senses Fail. This by-way stop from the Saints and Sinners Tour which features Hollywood Undead, Haste the Day and Brokencyde has had me squealing excitedly for months.

Between Cleveland and Cincinnati, Senses Fail will be taking a break from the Saints and Sinners line-up to play a solo show with two local Columbus bands at The Basement. Compare the size of The Basement (200 capacity) to Saints and Sinners venues (avg. 1500), and this is sure to be an intimate surprise for fans.

This will not be my first time seeing Senses Fail; rather, it will be somewhere near my 8th, and the story behind the times prior is a strange one. You see, I've never really seen Senses Fail on purpose. I know that makes no sense, but it's true.

When I first saw them at Taste of Chaos in 2005, the only songs I knew by them were "One Eight Seven" and "Buried a Lie." After that, I saw them on Warped Tour six times. Yes, six. Most of these occurrences have been mere effects of following My Chemical Romance around for much for 2005, and others from attending multiple Warped Tours in multiple states, and Senses Fail's tendency to play multiple sets at said Warped Tours.

Well, no more! This time I'm seeing them completely on purpose and am proud of it. "Thrashabout Thursday," as I have deemed March 12th, cannot come soon enough. If you see a girl with half-red hair running wildly from Morton between 4:30 and 5:00, Oh Athenians, dare not cross her path-- you will be knocked down.

Expect pictures and a review in your near future, readers.