As the My Chemical Romance return continues to unfold, I am creating this space answer some of the more common questions floating around the fandom.  I will update this as new questions arise. And, knowing MCR, we'll have far more questions than answers coming our way! Stay tuned!


Are My Chemical Romance going to tour?
As of today (Friday, November 8), the band have announced two shows and two festival appearances. There has been no official word on a tour, but at this juncture, it seems safe to assume more dates are to come. The currently announced shows are as follows:


Who's the drummer?
Jarrod Alexander, who drummed for MCR before and whom you also seen and heard playing with the individual members for their solo projects will be rejoining the guys. At this time, that has only been officially confirmed for the return show.

Who is the keyboardist?
Jamie Muhoberac, whom you will know as the studio keyboardist and sound designer for Danger Days: The True Lives Of The Fabulous Killjoys, The Black Parade and Gerard Way's solo album Hesitant Alien, will apparently be joining the band for their return show, based on series of tweets from his daughter.

What's the deal with "Merlin?"
[Excerpted from my article for AltPress.com: "My Chemical Romance Return Sparks Fan Theories Over New Imagery"]
When some fans went deep-diving into the HTML of MCR's website after the return, they noticed something interesting: The new logo image file was titled "Merlin_983_8idj38862.png" Upon further investigation, they also found the angel statue image encased in a code section titled "Merlin Cover." Check out the prevalence of "Merlin" in the screen grab below... 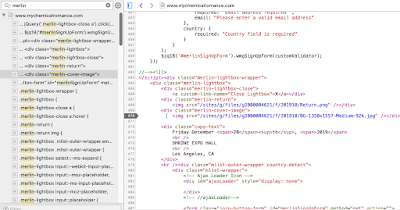 READ THE REST OF THIS THEORY ON ALTPRESS.COM!

We would also like to acknowledge the sculptor, and the lovely city where it can be found - Pasquale Rizzoli, Magnani Chapel, 1906, Bologna, Certosa Monumental Cemetery (thanks to Istituzione Bologna Musei | Museo civico del Risorgimento).


Was the reunion planned all along?
"California 2019" was a prevalent theme during the Danger Days: The True Lives Of The Fabulous Killjoys as it was the set and time for the Killjoys universe. You all know the story already, but to reiterate, Killjoys was set in post-apocalyptic California and told from the perspective of masked renegades attempting to survive in the desert and outrun the malicious Better Living Industries. Could MCR have been setting up a long precursor to this return by giving their final album the same setting as their eventual reunion? Gerard has always said he plans things with the band well in advance, after all...

There's no definitive evidence pointing either toward or against that theory, but in a recent Kerrang! interview with vocalist Geoff Rickly from Thursday, he references Gerard's feelings about their reunion timing. Rickly said:

“I spoke to Gerard about the reunion a little bit recently and he said it felt like it was the right time. One of the things he said was, ‘I don’t know if it would have happened if it wasn’t now.’ And I got what he meant by that. At some point it just becomes too long, like, ‘I don’t think I can get back there, personally. It’s just too distant and too weird.’ So I’m glad that they’re doing it. I think it’s amazing. And no matter what, I’m going.”

Will they release music?
Naturally, everyone wants to know if MCR are going to give us more music—whether music they were working on before the split that never saw the light of day or brand new music. This is yet another question we cannot answer yet!

The Thursday Coordinates (Debunked!)
Thursday briefly made us all lose our minds when they featured coordinates at the bottom of their announcement they were playing a return show:

The coordinates lead to New Brunswick, New Jersey—Thursday's hometown, and they're featured on all of the band's show announcement images. So, unfortunately, it looks like we won't be getting a secret NJ basement show, friends. If it's any consolation at all, here's a video of Tucker Rule (who also played in Frank Iero And The Future Violents) playing "House Of Wolves"


They say “Man makes plans, God laughs.” When Thursday booked our 20th Anniversary tour last year, we knew that it would likely be our last chance to go out on the road together before life took us our separate ways once again. So we made the most of it, played two shows in every city, and tried to make sure we saw all of our friends at least once more. But one thing that we never could have planned for was the reunion of our closest friends, My Chemical Romance. It was a sincere but welcomed shock when they told us their plans and asked if we wouldn’t join them. Well, we never thought we’d get a chance to say this, ever again, but here it goes: We are honored to announce we will be supporting @mychemicalromance , at the Shrine Auditorium, in Los Angeles, California, on December 20, 2019. See you there.
A post shared by Thursday (@thursdayband) on Nov 8, 2019 at 12:06pm PST

Does this means the solo projects are done?
This is yet another question that has no answer at the moment. All we can do is look at past patterns. Frank, we have joked, has been in about a million bands, and many of them were active at the same time as My Chemical Romance, ie. LeATHERMOUTH and Death Spells, so an MCR reunion doesn't necessarily eliminate their other musical projects.