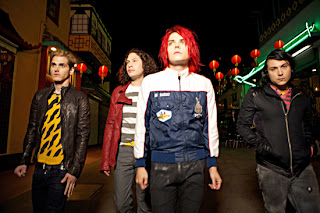 In an interview with The Aquarian Weekly, My Chemical Romance's Frank Iero remained fairly quiet about what the band are doing in the studio right now and expressed the band's "pleasure" to "help out" when they got the call to fill in for Blink-182 at Bamboozle.

But don't get excited at the prospect of other one-off shows while MCR is still in studio just yet.

Iero said, "We are in writing-mode right now and weren’t going to consider playing any shows, actually" until they were presented with the Bamboozle situation.

According to Iero, writing is going well and the band are "maybe a month away from the record button lighting up," however, he gave a "no fucking way" when asked if he could give a timeframe for the album's eventual release.

My Chemical Romance will perform at Bamboozle Festival in Asbury Park, New Jersey this Saturday, May 19.