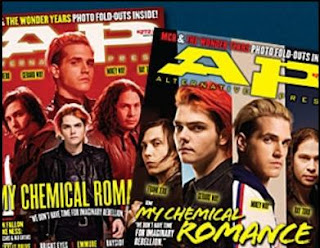 Alternative Press announced yesterday that My Chemical Romance will appear on the cover of their March 2011 issue. The issue, which will be available for purchase February 1, will feature two cover variations and a feature article about MCR.

AP's preview says the following about My Chemical Romance:

For close to a decade, the New Jersey contingent staked their own claim in America's post-emo landscape, resonating with fans and flummoxing their detractors. Last year, they lost focus, a drummer and their sense of self. This year, they're getting it all back—and more.

In addition to featuring MCR on their upcoming cover, AP is also holding a contest for fans to win "a huge prize pack."

Two winners will receive: an autographed copy of the issue, limited edition Danger Days... vinyl, various MCR and AP merch and copies of 3 previous issues of AP that feature MCR on the covers.

Check out this hilarious video interview from APTV in which all the touring members of My Chemical Romance discuss "The dead mic."